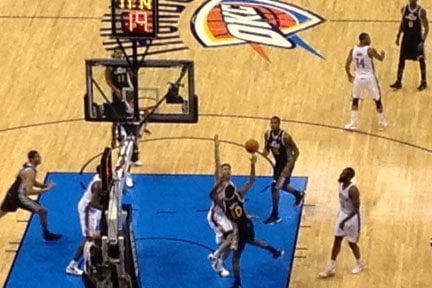 The Oklahoma City Thunder conquered the Utah Jazz for the second time in five days, but this time they did it at home in the Chesapeake Energy Arena to the tune of 111-85.  After playing their last five games on the road, the Thunder had four days to rest before their second meeting with the Jazz.  Utah, however, was playing its third game of a back-to-back-to-back.

The Thunder jumped out to an early lead in their biggest win of this condensed season.  Coach Scott Brooks noted that defense was a key early on.  In the first seven minutes of the quarter, the Thunder held the Jazz to only four points.  Serge Ibaka led the effort by coming up with six of the team’s 13 blocks.

On the offensive end, Serge had another double-double with 16 points and 10 rebounds.  Russell Westbrook also had 16 points and joined Magic Johnson and Oscar Robertson by racking up 5,000 points, 1,900 assists, and 1,300 rebounds in his first 274 games on a fast break assist from Kendrick Perkins.  Perk was showing a little love for his teammates on Valentine’s Day by matching his career high with six assists on Tuesday night.

James Harden, who lead the team with 22 points, opened the fourth quarter with a knock-down three to extend the lead to 19 and get the crowd out of their seats.  Kevin Durant followed Harden with 21 points on a night when shooting was not one man’s job.  In fact, every active Thunder player saw action and each of them scored.

The Thunder’s young bench players were productive in the minutes they saw.  Reggie Jackson played for a career high 24 minutes because Westbrook got in foul trouble in the third quarter.  Cole Aldrich had four points, four rebounds, and a steal in just over five minutes of play.  The young center always gives his full effort when he gets in the game as he tries to break into the lineup of tough Thunder bigs.

The Thunder starters will appreciate those minutes they got to sit when they go to Houston tonight to face an improved Rockets team for the third time this season.