One last game for Bowman and the Chiefs 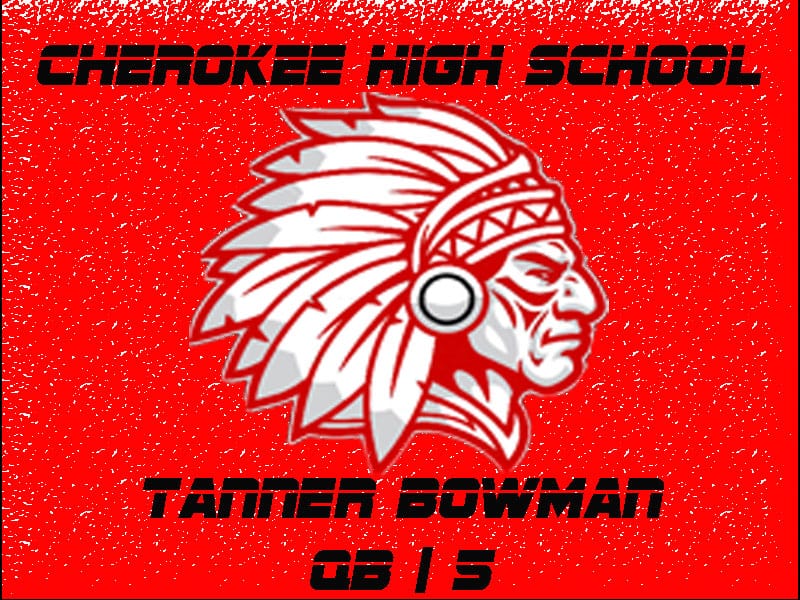 On Saturday, senior quarterback Tanner Bowman will lead the Cherokee High School Chiefs onto the field one last time. The top-ranked team in Class C football will face off against No. 2-ranked Tipton High School on Saturday, December 6 at Fast Lane Field in Weatherford.

Since moving down from Class B football in 2012, the Chiefs have been one of the premier teams in the division. Head Coach Bryce Schanbacher has seen his team make the playoffs each of the last three years, reaching the semifinals every year and the championship game the last two seasons. With Bowman directing the offense the last three seasons, the Chiefs have averaged 48.5 points per contest.

Last season they faced off against the same Tipton Tigers, winning 38-14 in the championship game to finish undefeated. Bowman contributed 112 yards rushing and three touchdowns in the game. The Chiefs will face Tipton again on Saturday with the same stakes. The Tigers come in averaging 55.0 points per game and allowing just 52 total points over 13 games this season. They blanked No. 3 Fox High School 38-0 in the semifinals last Friday night.

“We just have to play our game,” said Schanbacher. “We’ve got to do the things we’ve been doing all year at this point, don’t try and reinvent the wheel. Both teams have got a lot on that line and it’s time to put it all out there.”

This season, the Chiefs arrive at the championship game riding a 25-game win streak. Their high-powered offense has scored an average of 51.1 points per game, including a season-high 68 points over No. 4-ranked Grandfield last week. The defense has been no slouch, holding three opponents to shutouts and allowing opposing defenses a miserly 15.8 points per game.

“We run the same defense and our offense has been centered around the same principles as last year,” said Schanbacher about his team’s performances the last two years. “We just go out every day and get to work and focus on who we’re getting ready to play that week. We just take it one game at a time.”

It has not always been easy however. A little over three years ago, a tragic car accident changed Bowman’s life forever. On Nov. 25, 2011, Bowman was riding home from Enid after shopping on Black Friday when Tanner’s mother, Lori Bowman, drifted into the opposite lane of traffic. Lori and the driver of the other vehicle, Janice Louis Todd, both died as a result of the crash. Bowman himself emerged from the accident with a broken femur, a fractured hip, several broken ribs, a broken wrist and a punctured lung.

Despite injuries that could have derailed a promising athletic career, Bowman battled back. He was released from the hospital after a two-week stay. He committed himself to his physical therapy, and by the time spring football rolled around, he was cleared to practice with the team.

“The big thing was trying to get back to where I could be 100 percent, putting in work,” said Bowman about getting back on the field. “I’ve always been active, so sitting out, missing games and having to sit on the sidelines and watch other people play was not something I was a fan of. The main thing on my mind was working as hard as I could so I could be even better.”

“Like Coach Schanbacher says, just get ready for the team you’ve got that week. Take a business-like approach to it and give them everything we have,” said Bowman.

Bowman has taken that approach to heart and delivered one of the best playoff performances in OSSAA playoff history at any level last Friday. In the semifinal against No. 4 Grandfield, he racked up 356 yards on the ground and accounted for six touchdowns, including a 78-yard kickoff return in the second half. His rushing yards were the eighth-best total in playoff history, and the most yards on the ground for an individual player since 1996. His six touchdowns tied for the third-most in a playoff game, and the most since 2010 when current University of Oklahoma running back Alex Ross accomplished the feat.

“First of all, I have to give it up to God for giving me the ability. It could have been that I couldn’t even play that game. I could have been done freshman year after that accident,” said Bowman about his record performance. “Second of all, it’s pretty easy when we have the offensive line that we do. They do a terrific job and all I have to do is run, those are the guys that put in all the work.”

A three-sport standout, Bowman won’t be resting once the clock runs out on Saturday night. He will quickly make the transition to basketball, where he features as a guard for the Chiefs. Bowman will wrap up his high school career in the spring on the baseball diamond. Despite questions of where he will attend college or the upcoming basketball season, Bowman maintains his business-like approach.

“I’d like to play football somewhere next year. Not sure where, but we’ll see about that,” said Bowman when asked about his plans. “Honestly, I haven’t been thinking much about next year. We’ll get to the game Saturday and then see what we have to do from there.”

For now, the hopes of the small northwestern Oklahoma town of 1,498 people will rest on the shoulders of Bowman and his teammates. After the Cherokee High School Alumni Band plays the National Anthem to begin the game, there’s nothing to do but leave all on the field. Bowman and the Chiefs plan to do just that.