Onifade learned one sport to get better at another one 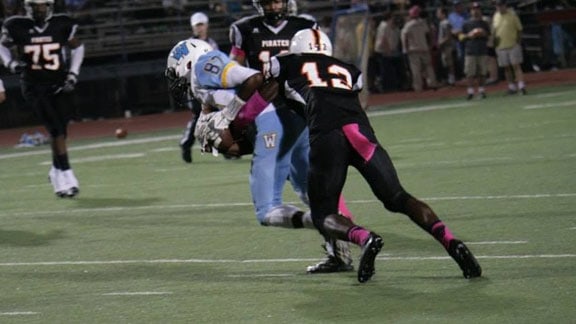 As a senior he recorded 99 tackles and three interceptions and was a hard-hitting defensive back. His performance was enough to earn an offer from a Division I university.

But preparation for his senior football season came not just on the football practice field, but also on the wrestling mat as a junior.

Onifade makes the tackle. He had 99 during his senior campaign. Photo by Steven Stark.

“I really have to give credit to wrestling,” Onifade said. “One of my friends told me to wrestle because it would prepare my mind and help me physically. So I went into wrestling and had a great season and I learned a lot.

“And when I went into my senior year football, that aggression came out. I just started playing more freely. I didn’t get injured my senior year at all.”

He was also willing to spread the credit for his success, not only to another sport, but also to his friends.

“Always had my boy, Drey Christon, right there at my side at corner and Christopher Pogi also, and we just kind of dominated the defensive side of the ball. And I just praise God for my teammates also.

“We really worked hard this summer and I worked really hard and pushed myself mentally and that’s why I got to the position I was at. And, of course, I thank God for my ability.”

Onifade was involved in the Class 6A Pirates’ offense as well as defense. However, he said he knew on which side of the ball he was stronger.

“I never really focused on stats, I mean I know my defensive stats, that’s my primary position. But I was just kind of a go-to guy. If they needed me to do something or if they needed me to make a play, I was just right there. Coach just told me to run a route and I would do it. Not much on the offensive side.”

Although he downplayed his impact, Onifade was named to the all-conference team as a wide receiver for the OK Big 10 Conference.

The senior didn’t wrestle this season, so he could focus on a third sport – track. He was a part of the 4×400 relay team that competed in the 6A state meet. 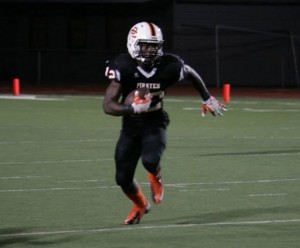 Onifade was an FCA All-Stater this season. He was nominated by coach Grant Potter. Photo by Steven Stark.

Onifade is also a big part of the FCA program at Putnam City, an organization he called ‘incredible’ and one that has grown on him.

“I remember my sophomore year, I didn’t know anything about FCA. I just remember coming into high school, that was the group that prayed around school.

“I was always born and raised in the church, so it definitely attracted attention to me, so I joined. But after Coach (Grant) Potter introduced me to FCA and I went to my first FCA camp going into my junior year. That summer, honestly, I was a little bit skeptical about going far away and being roommates with people I have never met and being in the woods, because I’m really not an outdoor person. But it was honestly an amazing experience.”

He said he appreciates the fact that there are objectives to the things FCA does and that putting those things to work at his high school has made a difference.

“And I just loved how the activities we did related to Christ, like Christ’s weapons and everybody was there for a purpose.

“Sometimes when you’re going to high school, you feel like you’re the only Christian, you’re the only one who still cares about God and it’s hard to find that one more person that’s still that devoted to Christ. And it’s really great to be in that atmosphere with people with the same minldset as you and the same drive and the same love for Christ.

“It was amazing and I went back to school and I implemented all the ideas I got from FCA into my school and just started building the program and we just started having more people coming out to FCA and had people share their testimony and give their lives to Christ. It was just an amazing opportunity just to see that evolve.”

Onifade was born in Nigeria, and his mother did what it took to bring his family to the United States. He arrived in Oklahoma when he was five.

He said his family came to the United States to be in a position to have better opportunities and better education. Onifade has made the most of these and now he is moving again for the next chapter of his life. This time, it is just to an adjacent state as he will be attending Abilene Christian University in the fall. And he said he is headed the right direction.

“At first I was commited to the University of Central Oklahoma. And then I had been talking to Abilene throughout the whole recruiting process and they offered me about two days before signing day.

“And I told my mom that I remember Abilene coming to recruit me and talking with me and telling me everything about them and the university and the football program and spiritually and I was like, ‘Mom, this is the school for me. This is where I want to go.’

“One, it’s away from home. And it’s a Christian community, it’s Christ-based. Everything they do is Christ-based. I love the fact that they have chapel every day and everyone is required to go to it. You don’t get that at every university. And it’s a private school, great education and playing Division I football, you just can’t ask for more.”