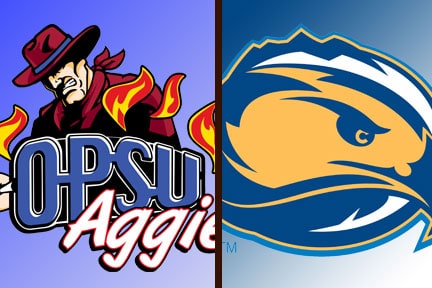 Fort Lewis, Colo.—In their second game of the season the OPSU football team traveled to Fort Lewis College looking for redemption from last year’s home loss that slipped through their fingers in the final minutes; atonement was not achieved as the Skyhawks outscored the Aggies 41-20.

An 86-yard touchdown pass from freshman quarterback Brandon Ramon to receiver Zacari Lavender got the Aggies off to a favorable start on their opening drive in the first quarter, but the Skyhawk defense tightened up and held the Aggies to three consecutive three-and-outs while Fort Lewis added ten points to the board to take a 10-6 lead after the first 15 minutes of play.

Gaining momentum with two more touchdowns in the second quarter, the Skyhawks jumped ahead 24-6 while the Aggies remained scoreless until the 30 second mark when Ramon completed two passes for first downs, the second of which was taken 15 yards to the end zone by sophomore receiver Devyn Williams. At halftime the game was within reach with the Skyhawks holding a 24-13 lead.

The Aggies failed to convert a fourth-and-two play to open the second half giving Fort Lewis the ball on their own 30 yard line. The Skyhawks drove 54 yards to the OPSU 16 yard line where they were stuffed for a nine-yard loss by Aggie linebacker Isaia Vimoto. Held to a field goal by the Aggie D, Fort Lewis led 27-13 midway through the third quarter.

A holding penalty put the Aggies back on their own five yard line and, after moving  30 yards on five plays, the Aggies were taken for a loss on a sack and then had a bad snap on the punt to turn the ball over giving the Skyhawks great field position for a quick score (34-13.) With 3:14 left in the third the Aggies put together a nice drive anchored by senior running back Chris McClendon who racked up 36 yards on four plays for a much-needed OPSU touchdown. Fort Lewis answered with an 82-yard touchdown pass to close out the quarter with a 21-point advantage (41-20.)

No points were scored in the fourth quarter sending the Aggies home with another disappointing loss to the Skyhawks. Fort Lewis contained the Aggie running game holding OPSU to 94 yards rushing for the game. The teams were evenly matched in passing with OPSU totaling 244 yards in the air to FLC’s 222. Perhaps the most stunning aspect of the game was the fact that the Aggies went 1-12 on third down conversions and were 0-4 on fourth down.

Game leaders for OPSU included McClendon who rushed for 86 yards on 16 carries and one TD; Lavender totaled 102 yards receiving with one touchdown; and quarterback Brandon Ramon went 15-35 for 244 yards passing and two TDs. Defensively senior Jamel Major was a standout with eight tackles, two pass break-ups and one interception; Davion Smith led the team in tackles with 11 followed by senior Tanner Hallford who totaled nine tackles and one quarterback hurry.

After the game Coach Gaskamp spoke of the effort, “Right now we are not a very good football team because we are not doing the little things right, the kind of plays that make all the difference in the world. First, our defense has to tighten up against the run. We have allowed 200+ yards in the first two games and that is unacceptable.

“Offensively we are very sporadic right now; we look good at times but we are not getting enough consistent play in the offensive line. We will never win a football game when we are that bad on 3rd and 4th down; you have to win those plays to keep drives alive. Finally, we made some critical mistakes in the special teams phase. The fake field goal for a touchdown, a bad snap on a punt that led to a quick touchdown for them, and the holding penalty that negated a kick-off return touchdown really hurt us in the game.”

The Aggies look forward to their home opener this week against lone-time rival Langston University on Saturday, Sept. 19 at 2 p.m. OPSU will host a Military and First Responders Appreciation Day recognizing local groups during the game; free t-shirts commemorating the event will be handed out at the gate as supplies last. Saturday’s game will be sponsored by Chrysler Corner in Liberal.

Aggie fans can look forward to a halftime performance from the Little Aggies Cheer Camp which will take place in the OPSU Noble Center Saturday morning; registration is still open and interested parties can contact Barbara Randle at barbara.randle@opsu.edu for more information of visit the Cheer page on the OPSU Aggie Athletics website for registration information. Prior to kickoff OPSU will be recognizing all Hispanic student-athletes in honor of Hispanic Heritage month.