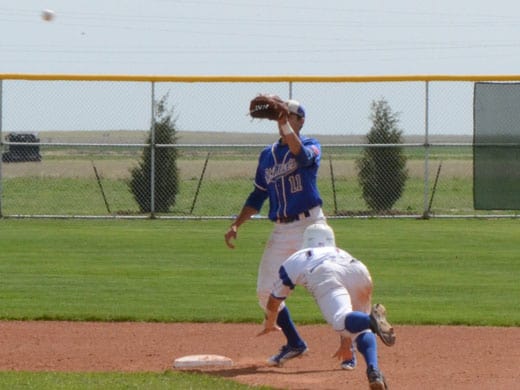 Aggie Casey Kettler dives to get under the ball during one of last year's games against St. Mary's University. Kettler returns this year to play in the outfield.-Brenna Balduff photo

Goodwell, Okla.-According to the calendar, winter still hangs over us, but the start of the Aggie baseball season is only days away.

Aggie Casey Kettler dives to get under the ball during one of last year’s games against St. Mary’s University. Kettler returns this year to play in the outfield.-Brenna Balduff phot

The men play their first game on Feb. 1 with a three game series at McMurry University in Abilene, Texas and head coach Steve Appel looks forward to a great season. He said, “While we are young in some areas, we will build on last year and I believe we can compete with everyone in our conference. We
will play hard every game.”

The entire infield will be made up of new players with likely starters Nick Crosswhite at first, Payton Osbon covering second, Gregory Siquieros on third, and Robert Montoya in the shortstop position. Returning Bo Ybarra and newcomer Davis Bradley will share duty behind the plate. Others to watch that have joined the squad are Alan Scott and Joshua Land on the mound and Trey Wooten and Alfonso Gonzalez in the outfield.

The team travels the entire first month of the season with their first home game not scheduled until March 1. Appel said, “Playing on the road shouldn’t affect the team at bit-being on the road is exciting and we let the guys see the sights.”