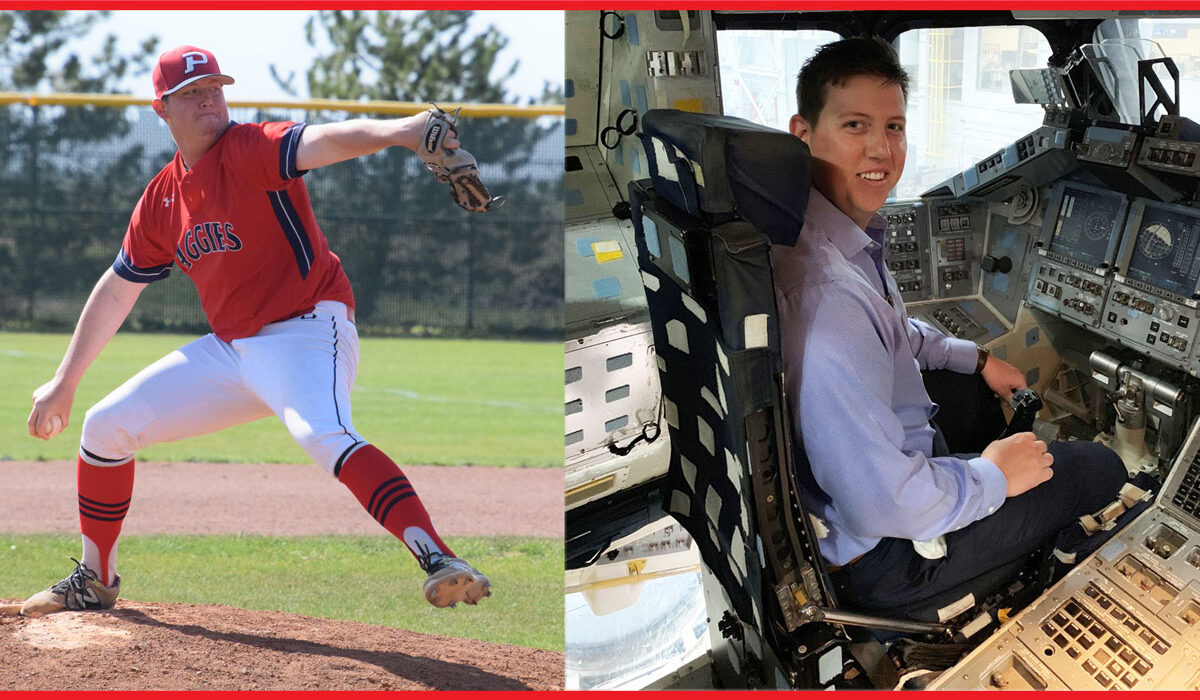 It’s a long way from Goodwell, Oklahoma to the International Space Station (ISS), but former Aggie baseball player Jeremy Norris (cl. 2019) found a way to make the connection after graduation. Norris is part of a small group of data experts contracted by the National Aeronautics and Space Administration (NASA) – as a part of its much-larger team – which keeps the ISS soaring 254 miles above the earth.

Norris is part of the nine-member Mission Control Center Recon unit – which includes three other former Aggies in team leader Paul Roberts (cl. 2001), Dave Montoya (cl. 1999) and Jorge Rosas (cl. 2019) – and has the title of Recon and Training Operations Specialist, serving as a part of NASA’s Mission Systems Operation contract. In layman’s terms, Norris and company provide telemetry products that allows data to be received from the ISS. They also provide products that allows for the flight controllers to send commands to the station.

The team also processes flight software from partners (like Boeing); taking the software and reconfiguring it for whatever mission is upcoming for the ISS. Norris’ work has also afforded him the opportunity to work closely with the Canadian Space Agency on software for its Canadarm2 of the ISS.

And NASA’s own information on the ISS points out the need for people with Norris’ skills. According to ISS Facts and Figures, more than 50 computers control the systems on the space station. There are more than 3 million lines of software code on the ground support. In the International Space Station’s U.S. segment alone, more than 1.5 million lines of flight software code run on 44 computers communicating via 100 data networks transferring 400,000 signals (e.g. pressure or temperature measurements, valve positions, etc.).

“OPSU got me started along the lines of computers for sure,” Norris said. “When I first got there, that was one of my interests. I always had an interest (in space), but I would say the job fell in my lap. It really intrigued me; I was like ‘wow, this is a lot cooler than I ever thought it could be’. My brother and my girlfriend’s brothers are all pilots, so my family has always been interested in flight.”

Norris found out about the job possibility of working with NASA one day after class, as Roberts had reached back to his OPSU roots to see if there were any current Computer Information Systems students interested in an opening. Norris jumped at the chance and did a phone interview. The chips further fell into place for Norris as OPSU’s Computer Club was going to Houston for a competition shortly thereafter, allowing him to hitch a ride, do an in-person interview and also take part in the competition with his fellow Aggies.

“The computer department at OPSU is just so good,” Norris recounted. “It really teaches us the right problem-solving skills. They do a great job. I had a class with each and every member of the CIS department and they are phenomenal; the structure of the classes and the small class sizes.”

Norris, who began his college baseball career at Grand Canyon University, feels that OPSU’s class structure was particularly helpful in transitioning seamlessly to his career. “You can definitely get lost in the shuffle (at a larger university). I couldn’t even schedule an appointment with a professor there; which blew my mind. Then I come to OPSU and it’s like ‘yeah, anytime you need something my door’s always open’, so that was pretty awesome. With the smaller class sizes at OPSU it was very familiar for me to work. It definitely helped me for the future.”

His three seasons (2017, ’18, ’19) in the Crimson and Blue on the baseball diamond also played a big part in prepping him for the transition to life after college.  Norris’ career bridged the Aggies move from NCAA Division II to the NAIA, helping the program to a pair of Sooner Athletic Conference playoff berths his junior and senior years.

“Everyone says baseball is a grind,” Norris explained. “A lot of games; long season. That kind of translates to life. I think baseball brings out some mental toughness that can help you down the line. And teamwork. Everything I do I work with a team…and it’s a really big collaborative effort. I think OPSU exemplifies that. In the classroom it’s very collaborative as far as the CIS program and on the baseball field you’ve got to have nine guys. You can’t do it by yourself. The teamwork aspect is really big, and the comradery.”

“It definitely changed my perspective on life,” Norris says of coming to school in Goodwell. “It’s a different pace. It’s a great place to really focus. I really wanted to get a good education and maintain my solid grades – to have a high G.P.A. – and start working on my career.  Also, playing baseball. It’s pretty hard to argue with that! OPSU is a place where you can focus on what you want to accomplish.”

Norris says he often jokes with his girlfriend – Rylee Abert – who relocated to Houston with Norris and is a school teacher there, that the couple moved from one of the smallest cities in the United States to one of its largest. Like Norris, Abert (cl. 2017) was a student-athlete for the Aggies, playing volleyball, and going through Panhandle State’s teaching program during her career in Goodwell.

But that journey has provided Norris with an opportunity to have a hand in history, as the ISS celebrates its 20th year of human inhabitation. Likewise, Norris’ time as an Aggie has helped launch what has already been an out-of-this world career.