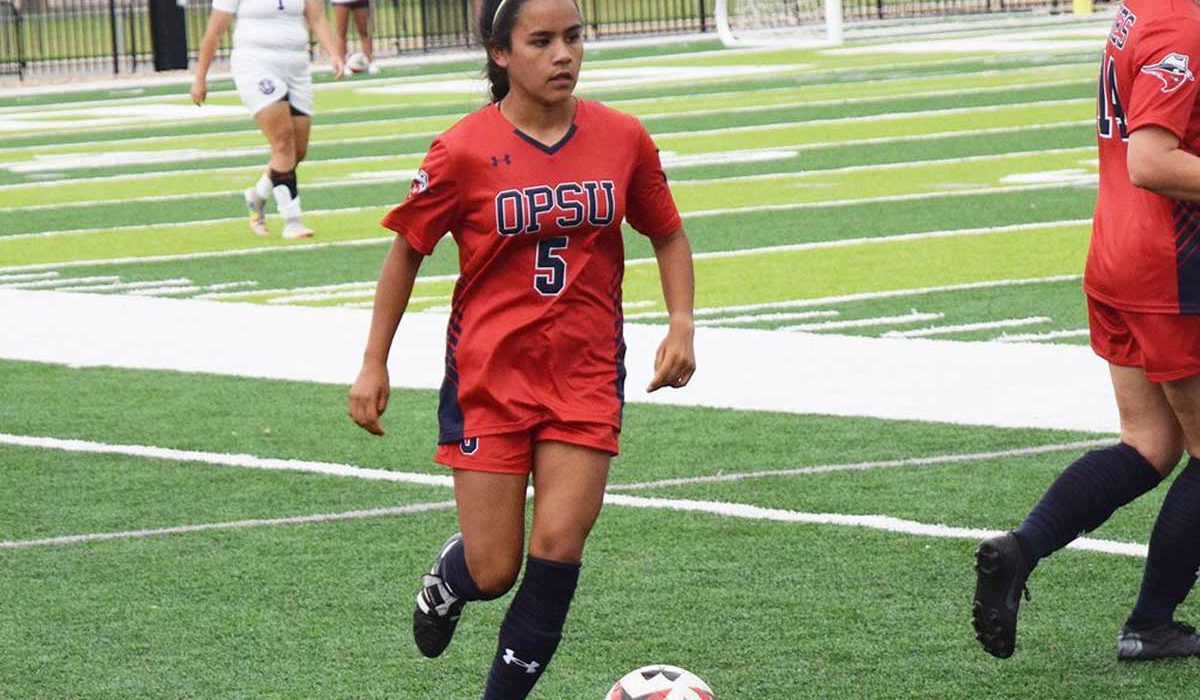 GOODWELL, Okla. – Freshman Sam Lopez (Ft. Worth, Texas/North Crowley H.S.) scored the first-ever goal in Oklahoma Panhandle State University women’s soccer history and her teammates made it stand up in a 1-0 victory over Texas College in the team’s inaugural match. A crowd of 792 was on hand to celebrate the historic win at Anchor D Stadium at Carl Wooten Field.

“It was great,” OPSU Head Coach Mike Rosso beamed after the win. “Great environment; I think the crowd helped the girls. We put a lot of hard work in the pre-season to get that first win out of the way and I think it will help us the rest of the season.”

The Panhandle team seemed to thrive off of the energy in the stadium, a fact that was not lost on Rosso. “I sort of wish I was playing, to be honest! I know the girls loved it, I loved it; to look across in the stands and see so many people cheer us on, it definitely gives us an edge.”

Despite playing to a scoreless draw at halftime, the Aggies dominated the Lady Steers in virtually every facet, with a 6-2 advantage in shots and 3-0 in corner kicks in the first half.

And the second segment was even more impressive by the Aggies coming out of the locker room. Panhandle tied down the Steers in the final 45 minutes, not allowing Texas College a single shot attempt, while peppering the visitor’s net with 14 attempts (out-shooting TC, 20-2, for the night).

OPSU not only displayed quantity in its shots, but quality, as well.  Ten of the Aggies 20 shot attempts were directly on goal. The most important of that cache of tries on-goal came from Lopez at the 53:52 mark of the match. Lopez took a pass from teammate Dani Hernandez(San Marcos, Texas/San Marcos H.S.), carried the ball a few yards to her right and then lofted a shot from 30 yards in front, just over the keeper’s arms and inside the left post to make it 1-0.

Panhandle State freshman goalkeeper Bre Taylor (San Angelo, Texas/Central H.S.) was akin to the old Maytag repairman commercials: the loneliest person in town.  Taylor did not have to make a save in the contest, as the OPSU defense – led by Marybel Garcia (Enid, Okla./Enid H.S./NOC-Tonkawa) and Angel Rodriguez (San Marcos, Texas/San Marcos H.S.) – did not allow Texas College any quality chances and forced most of the match to be played on the Lady Steers half of the pitch. Taylor got credit for the first win and first shutout in Aggie women’s soccer history.

Next up Panhandle State is a return match against Texas College on Thursday, September 5 in Tyler, Texas (6 p.m.).