OPSU rallies in fourth quarter to earn win over Langston 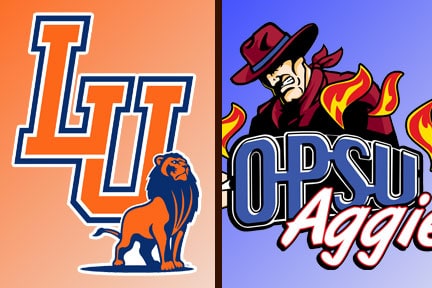 Goodwell – Saturday afternoon, in their 47th contest with Langston University, the OPSU Aggie football team enjoyed the taste of sweet victory against the rival opponent for the first time since 2004.

What started off as a Lion shutout became a battle to the bitter end in true college rivalry fashion. The Aggies breezed through the first half and sent the Lions to the locker room down 31-0 after the first two quarters of play. Langston came back with a vengeance in the second half outscoring the Aggies 21-3 in the third quarter and 14-6 in the fourth, but the Aggie defense held off a final attack with under a minute on the clock to give OPSU a 40-35 win on their home field.

The Aggie defense recovered a blocked punt on a three-and-out drive which gave the offense great field position setting the stage for Zacari Lavender, who put the Aggies on the board (7-0) with an eight-yard pass from Brandon Ramon five minutes into the first quarter. The Aggie D followed up with another three-and-out containment and Ramon marched the offense 69 yards downfield in 12 plays for the Aggies’ second touchdown of the game, a two-yard rush by Christopher McClendon who racked up 30 yards on the drive. Once again the Darkside Defense held the Lions on third down forcing their fourth punt of the opening quarter which McClendon returned for 68 yards putting the Aggies in scoring position. Three plays later Rod Moore reached the end zone on a five-yard rush to give the Aggies a comfortable 21-0 lead with three minutes still left in the quarter. Langston committed back-to-back penalties and were, once again, forced to punt as the clock ticked down.

The Aggies maintained possession through the end of the first quarter and started the second quarter on the Langston 24 yard line. Shane Truelove, in at quarterback, sent a 13-yard pass to Rod Moore and then moved the Aggies to first-and-goal earning three yards on a QB keep. Langston held the Aggies in the red zone and freshmen kicker Nik Clarkson made his first collegiate field goal from 25 yards. Langston turned the ball over on downs on their first possession of the quarter and the Aggies took over on their own 45. Truelove led the Aggies through a six-and-a-half minute drive that resulted in McClendon’s second touchdown of the day. The Lions put up a fight in their closing drive of the half but the Aggie defense did not let up; TraRay Givens came through with a quarterback sack for a loss of 12 yards. A turnover on downs gave the Aggies the ball with 1:01 left in the half. McClendon ran the clock out gaining 40 yards on four possessions.

In a tale of two halves Langston turned the tables in the third quarter and forced the Aggies to punt on their opening drive and then advanced 71 yards in nine plays for their first touchdown of the day. Langston’s defense then held the Aggies who went for it on a fourth and 15 play and immediately followed up with a 55-yard pass to the end zone to make the score 14-31. On the next series Truelove’s pass was intercepted on the OPSU 15 yard line and taken for a touchdown to pull the Lions to within ten points (31-21). As the tension mounted Nik Clarkson came through with his second collegiate field goal from 34 yards to give the Aggies a little more breathing room. The defense put a much-needed end to the third quarter with another three-and-out series bringing out Langston’s punter for the first time in the quarter.

A rare fumble by McClendon turned the ball over to Langston for a 40-yard touchdown return to open the fourth quarter putting Aggie fans on the edge of their seats. The ensuing series took the air out of OPSU as a turnover on downs put Langston mid-field setting up a three-play touchdown which landed the Lions in the lead 35-34. Devyn Williams put life back into the Aggies with a 57-yard kickoff return and a 30-yard touchdown to reclaim the game 40-35. Both teams battled through the quarter and OPSU did their best to run off the clock as they spent 4:34 on a nine-play drive but were forced to punt giving Langston the ball on their own 14 yard line with 54 seconds left in the game. The Lions completed a 39 –yard pass putting them in OPSU territory followed by a seven-yard completion getting Aggie fans on their feet.  A 20-yard pass followed by a six-yard pass had the Lions within eight yards of an upset. The Aggies took a timeout with seven seconds on the clock. Langston threw an incomplete pass and one second remained for one final play; forced to go for the end zone, the Lions’ quarterback put up a pass and, as everyone at Carl Wooten Field held their breath, Xazier Murry came down with the game-saving interception. A finer story could not have been written by Charles Dickens himself.

With such a fierce competition the entire game both teams sustained numerous penalties; Langston had 12 for 86 yards and the Aggies totaled 15 for 135 yards. The Aggies dominated on offense totaling 98 plays for 436 yards compared to Langston’s 62 plays for 328 yards. OPSU’s offense greatly improved on third down converting 12 of 23 with two fourth-down conversions. Unfortunately mistakes on the offensive side of the ball gave 14 points to the visiting team. On the defensive side the Aggies totaled two sacks, five tackles-for-loss, one interception, five pass break-ups and one punt block.

The Aggie QBs combined for 142 passing yards; Ramon went 11-17 for 70 yards and one touchdown, while Truelove completed 5-12 for 72 yards. McClendon led on the ground totaling 163 yards on 32 carries followed by Moore who had 75 yards on 23 carries; McClendon and Moore each had 13 yards receiving as well. Leading the receivers was Devyn Williams who totaled 64 yards on five completions eh also scored a 30-yard rushing touchdown. Freshman punter Jacob Test put up another great performance averaging 40 yards per punt and kicker Nik Clarkson landed all of his PAT attempts and both field goal attempts to make him perfect on the day.

Xazier Murry and Tanner Hallford led the team in tackles, each with six and Murry had the Aggies’ only interception which sealed the victory for OPSU. Givens was also a strong contributor on defense with two tackles-for-loss for 13 yards and one sack for a loss of 12. Osvaldo Gutierrez also had a sack in the third quarter.

“Obviously we played extremely well in the first half. I was very happy with the level of intensity that we played with. The second half (third quarter in particular) got off to an ugly start with the two defensive returns for touchdowns that our offense gave up. Some of our teams in the past, when faced with the adversity of being down after holding such a big lead, would have lost that game; but I was very proud of the resiliency we showed in coming back. It ended up being a very memorable college football game and I’m very proud that the Aggies came out on top.”

The Aggies will take to the road this week for another inter-state matchup with Bacone College in Muskogee, Okla. and will enjoy a bye week following. The team will return to Carl Wooten Field on Saturday, Oct. 10 for the OPSU Homecoming game against Southwestern University; and early kickoff is set for 1 p.m.