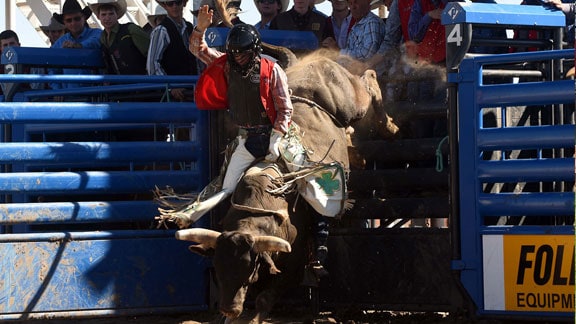 Josh Frost won the bull riding and the all-around title at the Colby, Kan. rodeo this past weekend. —Photo by Dale Hirschman

Coverage of the Southeastern Stampede on OSN is built by High Noon Trailer Repair.

The Oklahoma Panhandle Rodeo Team opened the 2016-2017 in Colby, Kan., last week. OklahomaSports.Net gets you ready for the Southeastern Stampede on Oct. 6-8 with a review of the OPSU trip to Colby.

Colby, Kan. — For the past month, Oklahoma Panhandle State University men and women’s rodeo teams have been preparing for the 2016-2017 rodeo season to commence. The dedication in the practice pen paid off. In Colby, Kan., the rodeo teams illustrated their talents and skills in the arena. Both men’s and women’s teams proved victorious by each claiming the champion team title of the weekend.

Leading the way for the men’s team, Men’s All-Around Champion Josh Frost, who made it back to the short go in three events, bull riding, calf roping, and steer wrestling. Dominating in the bull riding with a long go score of 80, followed by the winning score in the short round of a 77, Frost ensured the average win with the result of 157 on two head. Accompanied in the steer wrestling by team member Will Carpenter, Frost sadly fell short of the average. Carpenter, however, spilt fourth and fifth in the average with a total time of 15.3 on two head.

Jake Finlay led the saddle bronc riding with a 76 in the long go. Finlay followed that ride with a winning mark of 65 in the short go for the average win with a total of 141 points. Finlay was joined by freshmen Rhett Fox and Scott Davis. Fox was 67 in the long go, and Davis scored a 56. Both Fox and Davis just barely fell short of the eight-second whistle in the short round.

On the roping side of the arena, Colt Humbard, Bridget Merrigan, and Taylor Jacobson surpassed the long go. Merrigan and Jacobson roped their steer in nine seconds flat in the team roping paired with a seven flat with a leg in the short round. Merrigan also made it back in the breakaway with 2.8 in the long go that advanced her into the short go where she roped her calf in 3.2 seconds, ensuring her third in the average. She was also named the Women’s All-Around Champion for the rodeo. Merrigan was joined in the short round by teammates Randi Buchanan and Tanegai Zilverberg. Buchanan roped her calf in 2.6 seconds in the long go putting her in second place behind Zilverberg, who was 2.5 seconds. Zilverberg finished a phenomenal weekend by clocking the winning time in the short go of a 2.7, and winning the average with a total time of 5.2 on two head.

In the barrel racing, Melanie Roman clocked a 17.21 on her first run, a 17.43 on her second, and a total of 34.64 on two runs to split second and third in the average, contributing to the success of the women’s team as they claimed the champion team title of the weekend. Both men and women’s teams had an exceptional weekend at Colby. With the first rodeo in the books each team is eagerly awaiting the next rodeo in Durant, Okla. Oct. 6-8, to showcase their abilities and to achieve even greater goals.