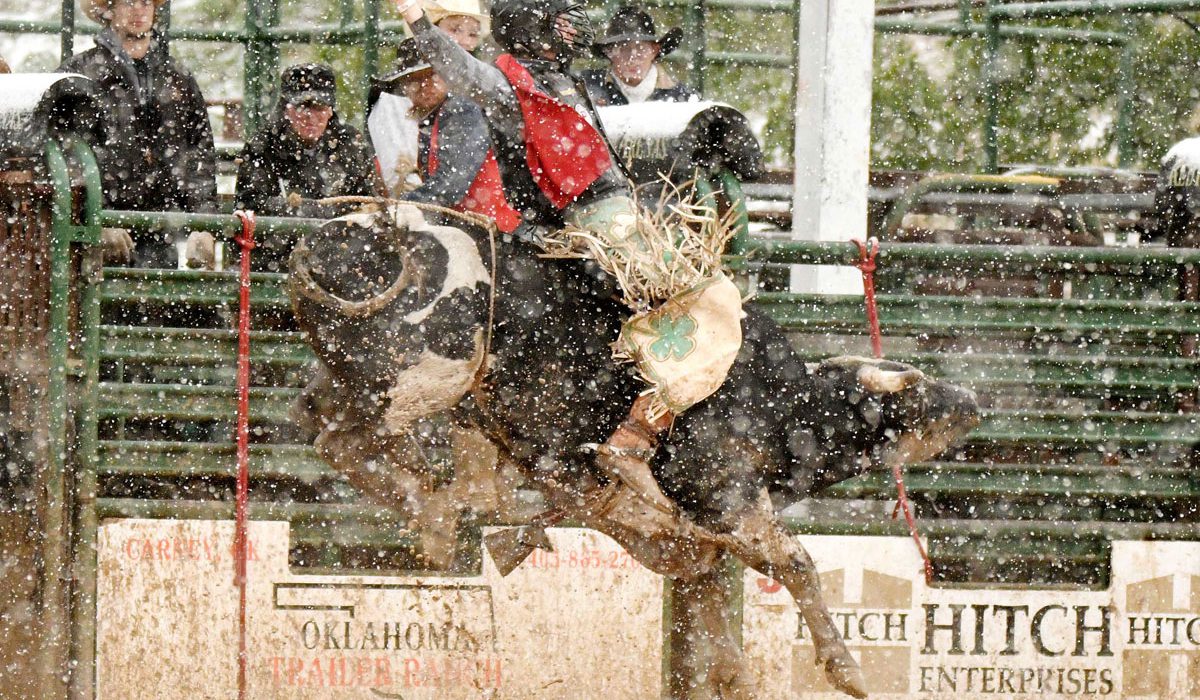 Senior Josh Frost won the men’s all-around title and the bull riding this past weekend at the “Doc” Gardner Memorial Rodeo. —Photo by Dale Hirschman

GUYMON — The Oklahoma Panhandle State University Rodeo team hosted the annual “Doc” Gardner Memorial Rodeo at the Henry “C” Hitch Pioneer Arena this past weekend. The Aggies battled less than ideal conditions to compete in, as well as, host the event.

With several inches of rain Friday night and rain, snow, and frigid temperature Saturday night, the Aggies managed to take care of business. The men’s and women’s team both finished in first place in their respective team standings at the “Doc” Gardner Memorial Rodeo. The Aggies also captured both all-around titles and three individual event titles.

Frost won the long round and the short round with a score of 79 points in each round, giving him a 158 in the average. Frost tied a calf in 9.4 seconds to place second in the long round of the tie-down roping, but had a little bad luck in the short round and failed to stop the clock. Frost paired with Buchanan in the team roping and made two consistent runs to land them in the third-place position. Buchanan made two solid runs in the goat tying to finish fifth in the average. She also made two solid barrel runs giving her a time of 37.19 in the average to finish in sixth place.

Senior Jake Finlay put on a strong performance in the saddle bronc riding. Finlay was 80 points in the long round and 75 points in the short round giving him 155 points on two as well as the average win. Finlay was joined by sophomore Taylor Tupper, sophomore Rowdy Chesser, junior Augustus Jones, and junior Cody Kendall all of which faced some tough horses from the McCloy bucking string and failed to make the eight second whistle.

Josh Frost won the bull riding and was joined by junior Cody Ballard and sophomore Dustin Martinez. Ballard was 148 on two head and finished in second place behind Frost. Martinez was 68 points in the long round to finish third in the round, but came down too early in the short round.

Joining Buchanan and Frost in the team roping was junior Payten Frost and Hunter Worm, however they faced some tough luck and took a no time in the short round. Back to the goat tying, senior Mary Frances Small ended her college career on a high note. Small was 10.1 in the long round, came back and was 9.6 in the short round to split second in the round and split third in the average. Junior Melanie Roman made two consistent runs in the barrel racing to finish fifth in the average with a time of 36.88 on two.

With this being the final rodeo of the regular season, the scores were tallied and several Panhandle State athletes will make their appearance at the College National Finals in Casper, Wyo. June 11-17. The top three in each event, along with the top two teams, the all-round champions, and reserve all-round champions qualify for the CNFR. The men’s team had an outstanding year and won the region by just under 2500 points. The women’s team gave it a solid effort, but came up just short of second place.

The team will get some much needed rest and continue to stay sharp as they prepare for the CNFR.