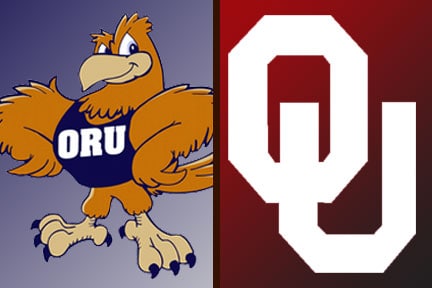 ORU won the opening tip and Maria Martianez scored the first bucket of the game for the Golden Eagles. ORU came out of the gate shooting well. The team shot 47 percent in the first quarter and held the Sooners to a shooting percentage of 37 percent. Maria Martianez led the way for the Golden Eagles with six points and three rebounds. No. 12 Oklahoma led ORU at the end of the first quarter 19-16. ORU scored 10 points in the paint.

Oklahoma jumped out to an 11-0 run in the second quarter. Lakota Beatty hit a three-point jumper to bring the team within eight, but the Sooners led at the half 42-31. In the first half the Golden Eagles shot 40 percent from the field with 14 points in the paint. ORU also saw success with 14 bench points in the first half.

The Golden Eagles wiped away two huge deficits in today’s game. In the third quarter, ORU trailed by as much as 17 points and the team rallied to within three by the end of the quarter. In the fourth, ORU erased an 11 point deficit and held the Sooners to two points in the final six minutes.

Oklahoma: Peyton Little scored 12 points for the Sooners and McKenna Treece had 11 rebounds.

INSIDE THE BOX SCORE

– Kaylan Mayberry had 12 points on the day along with three rebounds, four assists, one block and two steals.

– Maria Martianez scored 18 points along with 13 rebounds in the game for her first double-double of the season.

– Lakota Beatty had 20 points with one assist, two steals and four rebounds in the game.

– Ashley Beatty scored six points along with four rebounds, three assists and one steal in the game.

– Golden Eagles capitalized with 17 points off of turnovers.

The Golden Eagles will head home for a three game home stand that begins on Wednesday, December 7 against Missouri State. The game will be at 7 p.m. inside the Mabee Center. The Bears currently hold a 2-5 record for the season.