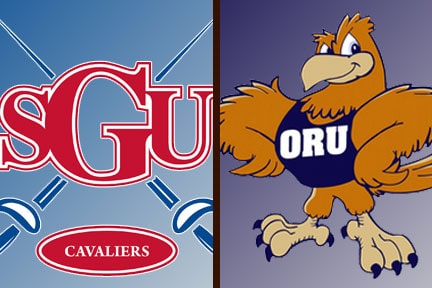 TULSA, Okla.-Oral Roberts (1-1) put the clamps on defensively and held St. Gregory’s (1-1) without a basket for more than 10 minutes, easing to a 90-41 victory Wednesday night at the Mabee Center.

Warren Niles hit 11-of-12 from the field and 7-of-8 from behind the arc to lead all scorers with 29 points in 24 minutes of action. With his performance, Niles tied his career high with seven treys, and moved from seventh to fifth on the career 3-point list with 207 made.

“Warren is a terrific shooter,” said Head Coach Scott Sutton. “I thought he only took one questionable shot, and passed up four or five shots that he should have shot. We have been stressing to the guys to share the ball, take good shots and not being selfish and I think that was in the back of his mind.”

Shawn Glover added: “He (Niles) does that every day in practice. He’s a great shooter, one of the best I’ve ever seen and it is a luxury to have him on my team.”

The blowout victory allowed for plenty of career highs, including career scoring nights from D.J. Jackson (11), Corbin Byford (8), as well as Brandon Conley and Korey Billbury, each of whom had six points. Jackson also had a team-high five assists on the night.

“I’m pleased with how we responded,” said Sutton. “I thought they tried to defend like we need to every game. This was an important game for our young players to get some experience. I thought it was good for Jordan and Corbin and Brandon to get in and play extended minutes. I thought all of them did a good job and I thought D.J. came in and played really well.”

Fayzon Richey led the way for St. Gregory’s as the only double-figure scorer, dropping in 21 points, 14 of which came in the first half.

Like he did in the first game of the season, Niles hit four early 3-pointers to account for the majority of the scoring early as he and Richey battled back and forth. Each had more than half of their team’s points 15 minutes into the game after Niles hit back-to-back treys to put ORU up 32-21.

After a Devonte Young 3-pointer, ORU went back to work and scored the final 16 points of the half to take a 48-24 lead into the locker room. The Golden Eagles did not let down out of halftime and scored the first seven points of the second half. It was not until 2:04 into the second half that SGU was able to score points, getting a layup by Richey, the Cavaliers’ first basket since the 8:13 mark in the first half, a stretch of 10:17.

A week-long road trip is up next for the Golden Eagles as they face Pacific at 9 p.m. (CT) in Stockton, Calif., on November 19 before heading north to the Great Alaska Shootout where they will face Loyola Marymount in an 8 p.m. (CT) tip off on November 22.