ORU holds down Sooners in 5-1 victory 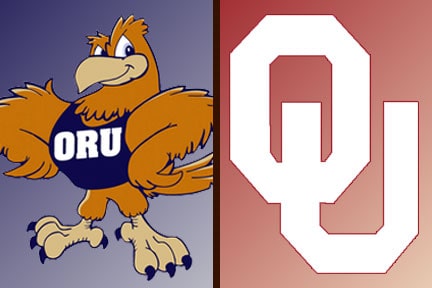 Golden Eagles surrender just one run against the Big 12 club

The Sooners plated their lone run of the game in the eighth inning, snapping a 30-inning scoreless streak against ORU.

Matt Whatley came up big at the plate all evening, tallying three RBI on two hits. Audie Afenir scored a pair of runs and also had two hits to his credit, as did Rolando Martinez.

The Golden Eagles used seven different pitchers in the victory, with Jacob McDavid pitching the sixth inning and getting credit for the win. Bryce Howe made his first career start on the mound and pitched 2.2 scoreless innings with five strikeouts.

Shawn Hunter took the loss on the mound for OU after coming into the game in relief of Adam Choplick, who had 10 strikeouts in 6.0 innings in the start. The Sooners had nine hits, including a 3-3 day from Joshua Ake, but left the bases loaded in the eighth inning.

Turning Point
Audie Afenir started the seventh inning with a leadoff double to start a rally that resulted in three Golden Eagle runs.

Individual Leaders
Oral Roberts: Matt Whatley, Audie Afenir and Rolando Martinez each had two hits in the victory, helping ORU to 11 hits in the game. Starting pitcher Bryce Howe struck out five Sooners, while Nathan Garza and Kyler Stout pitched the eighth and ninth innings, respectively, each striking out three.
Oklahoma: Adam Choplick had a career best 10 strikeouts on the mound for the Sooners, but did not get a decision in the game. Joshua Ake had three of OU’s nine hits, going 3-3 at the plate.

Inside the Box Score
– For the first time since April 7, 2012, Logan Domenico was not in the starting lineup for ORU, snapping his streak of 159 games, which stood as the ninth-longest active streak in the nation.
– ORU did not commit an error in the game, the second time this season in which ORU had been perfect defensively.
– Only three times this season has ORU had more than 11 hits in a game, and only once in the last five games.
– In addition to multi-hit games from Whatley, Afenir and Martinez, Noah Cummings, Matt Brandy, Emmanuel Forcier, Chase Stafford and Nick Roark each had a base hit.
– ORU had three extra base hits in the game, including a triple from Chase Stafford to start the ninth inning. It was the first triple by a Golden Eagle this season.

Scoring Summary
– ORU took the lead in the top of the seventh inning after Audie Afenir started the rally with a leadoff double and was moved to third on a bunt single by Rolando Martinez. Emmanuel Forcier sent a ball through the right side to score Afenir and put ORU up 1-0.
– Matt Whatley continued the seventh inning rally with a two RBI single through the left side, scoring Forcier and Martinez to make it 3-0.
– ORU added to its lead in the eighth when Afenir scored on an RBI double by Martinez.
– OU answered right back in the bottom of the eighth with an RBI double by Ake, scoring Chris Shaw, cutting it to a 4-1 ORU lead. The OU rally continued as the Sooners loaded the bases but Nathan Garza got Hunter Haley to strike out to end the threat.
– The final run of the game came in the top of the ninth after Chase Stafford’s leadoff triple to right center field. Stafford crossed home plate on a sacrifice fly by Whatley, hit third RBi of the game.

Up Next
Summit League play begins this weekend as ORU hosts North Dakota State for a three game series. First pitch Friday is scheduled for 6:30 p.m. from J.L. Johnson Stadium.