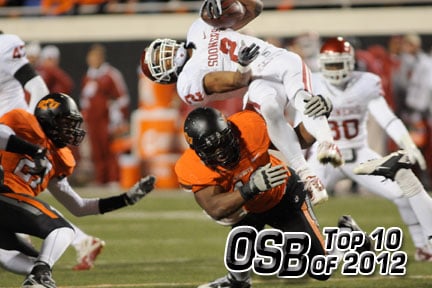 What’s the one thing better than the Bedlam football game each year?  More Bedlam.

In 2012, the OU/OSU game went to overtime for the first time, with the Sooners coming away with a 51-48 thrilling come from behind victory.

Landry Jones threw for 500 yards and three touchdowns in his final game in Norman.  And Blake Bell’s 4-yard touchdown run with four seconds left in regulation capped the Sooners’ comeback and led to bonus Bedlam.

But Oklahoma would not be denied.  Jalen Saunders returned a punt 81 yards for a touchdown and knotted the game at 38-38 early in the fourth quarter.  Each team scored on more TD in a game that barely slowed down even for a moment and the contest was tied 45-45 after 60 minutes of play.

OU’s defense held the Cowboys to a Quinn Sharp 26-yard field goal.  Then Brennan Clay’s 18-yard burst into the endzone – his first score of the day – gave the Sooners the win, 51-48.

Former third-stringer Clint Chelf threw for 253 yards and a touchdown in his first road start for the Cowboys.  OSU tailback Joseph Randle also ran for 113 yards and 4 TDs.

And for all the fans who downplayed the rivalry aspect of the game, a casual observer needs only to remember the long celebration that followed the Sooners’ win.  The rivalry is on and is likely to continue at a high level for many years.