OSB 2012 No. 10: Conference and national realignment 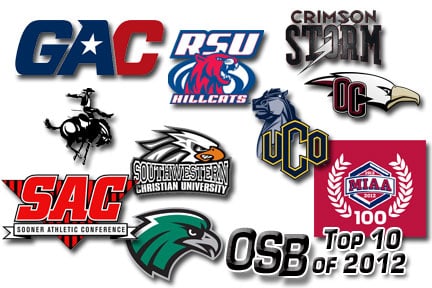 We start this year’s Top 10 list with a topic that won’t seem to go away: Realignment.

It’s a topic that won’t seem to go away for more than a month at time on a national level.  (Flavor of the month: the dissolution of the Big East)  But realignment had a big effect throughout Oklahoma in 2012.

On a national level, three schools made the jump from NAIA to NCAA Division II.  Northwestern, Oklahoma Christian and Rogers State were all accepted into the three-year transitional process.  NWOSU allowed for some drama, too.  Because not all of its administration was available to be on campus when the NCAA handed down word of the fate of this year’s applicants, Northwestern delayed its announcement of acceptance, allowing people to think this might be a denial, since the Rangers were turned away in 2011.  But in the end, everyone in Alva was happy and it gave Northwestern center stage with their press conference.

Northwestern joined Southern Nazarene as the first new members added to the Great American Conference, leaving behind the Sooner Athletic Conference.  SNU is now in its second year of the transitional process into D-II.

Lubbock Christian also made a similar move to D-II, taking the Sooner Athletic Conference membership from 12 in 2011-2012 down to seven at the end of this year.  This would have a big impact on this powerful league.

So in September, SAC commission John Hudson announced the addition of four schools to the conference: Southwestern Christian from Bethany, Okla., and Northwood, Texas Wesleyan and Southwestern Assemblies of God, all from Texas.  The SAC membership will be back to 11 in the 2013-2014 athletic year.

And we can’t forget that Central and Northeastern State officially entered the Mid-America Intercollegiate Athletic Association in 2012.  The initiation into the MIAA football schedule was tough.  The Bronchos won their first game on their fourth try, but finished 2-8. NSU was the final Oklahoma school to earn its first victory, winning in Week Seven, but won every game from then on.