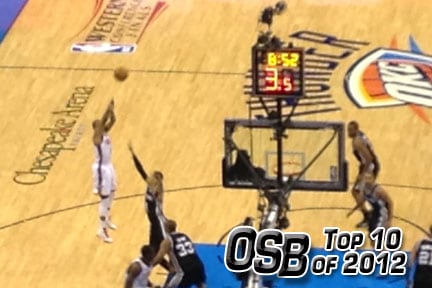 Oklahoma City took out the San Antonio Spurs, 4-2, to go to the NBA Finals for the first time since the franchise moved from Seattle. / Photo by Clarissa Johnson

Each year the franchise has been in Oklahoma, the OKC Thunder has made another step toward winning in all.  In 2012, that next step took the Thunder all the way to the NBA Finals.

Oklahoma City looked great in Game 1, defeating the Miami Heat 105-94 at home.  Unfortunately, things went downhill from there.  The Heat won the next four games and the Series, 4-1.

Oklahoma City took out the San Antonio Spurs, 4-2, to go to the NBA Finals for the first time since the franchise moved from Seattle. / Photo by Clarissa Johnson

Kevin Durant averaged 30.6 points and 6 rebounds in the Finals.  Russell Westbrook had 27 points and 6.5 assists per game.

But the Thunder were impressive throughout the playoffs.  They took out the last three teams from the West that had won the NBA title back, going back to the 1998-99 season.

In the first round, OKC avenged their loss in the Western Conference Finals from the previous season.  The Thunder swept the Dallas Mavericks, 4-0, and marked the first time that last year’s Finals MVP Dirk Nowitzki had been swept in a playoff series.

The L.A. Lakers, even with a reinstated Metta World Peace were no match for the Thunder, falling 4-1 in the Western Semifinals.

Then Oklahoma City overcame a 2-0 deficit to take out the San Antonio Spurs in championship style.  OKC stopped a 20-game Spurs’ winning streak in the third game of the Western Conference Finals, and never looked back.  The Thunder won 4-2 and for the first time the NBA Finals would have to stop through Oklahoma City.