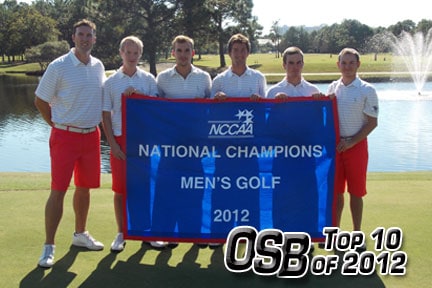 Oklahoma Christian’s men’s golf team was stellar in 2012, bringing home both a national championship and national runner-up finish to Edmond.

In the spring, the Eagles were ranked in the top spot in the NAIA through most of the season.  And in the NAIA national tournament, OC held a lead over Sooner Athletic Conference rival Oklahoma Baptist through three rounds.  However, the Eagles finished as runners-up to the Bison by three strokes.

A national second place finish is not bad, but Oklahoma Christian was not done in 2012.  In the transition from NAIA to NCAA Division II, OC also took on membership in the National Christian College Athletic Association and competed for its national championship in October. To say the Eagles performance over the competition was dominating would be an big understatement.

Oklahoma Christian won the NCCAA national title by 52 strokes and all five OC golfers finished in the top 10.