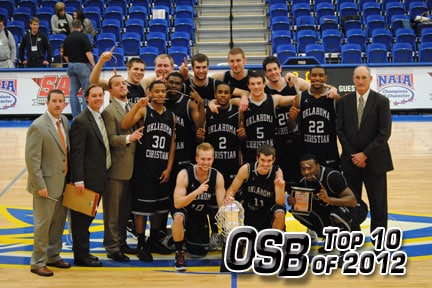 The Oklahoma Christian Eagles put things together at the right time to grab an invitation to the NAIA national tournament thanks to an impressive run through the Sooner Athletic Conference tournament.

OC finished in a three-way tie for fifth in the SAC, but were seeded seventh in the post-season tourney.  The Eagles then dispatched the top three seeds – all nationally ranked opponents – to take the tournament title.

Oklahoma Christian was paired with second seed and No. 10 Rogers State in the first round.  RSU beat the Eagles both times in the regular season in close contests.  But Kendre Talley and Will Reinke scored 18 points apiece as OC won the close one this time, 83-77.

The Eagles split with the third seeded No. 13 John Brown during the regular season and each team won on the road by 15.  The SAC semifinal was much closer and OC won 59-56.

The Bison beat the Eagles in both regular season meetings.  Reinke had a double-double with 21 points and 10 rebounds as the Eagles took down the top team in the country, 73-66, in overtime.

It was the first-ever SAC tournament championship for Oklahoma Christian and the first postseason title for the Eagles since 1982.  OC was 0-8 against ranked opponents in the regular season, but defeated three in three nights in March.