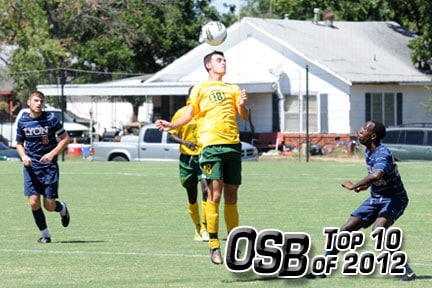 And although the postseason was unkind to them, it was a good year to be a soccer fan in Chickasha. USAO wound up with a record of 14-1-4.

The Drovers’ only true loss came in the second round of the NAIA Tournament, dropping a 2-1 match to Bellhaven.  They were also unable to advance in the Sooner Athletic Conference tournament, tying Oklahoma City 1-1, but the Stars advanced on penalty kicks, 5-4.

The Drovers started 2012 2-0-2, then won 11 straight and were ranked as high as No. 3 nationally.  It marked the fourth consecutive year for USAO to be invited to the national tournament and the first year to get to host a match.

And the individual honors mounted for the team as well.  Coach Jimmy Hampton was named the NSCAA All-Region Coach of the Year for the third time in four years.  Scott Parkinson, Perry Sansford and Bryan Byars received All-American honors with Parkinson being the first Drover in school history to earn First-Team honors.

Parkinson was also an NAIA Scholar-Athlete, while Kris Andrews received the honor of being an NAIA Champion of Character.

And this team graduates only one senior.  There could be even bigger things in store for the Drovers in 2013.