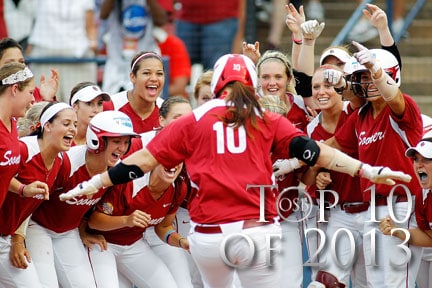 The Sooners won the Women’s College World Series, 2-0, over Tennessee in early June and showed themselves worthy of the No. 1 ranking they carried through most of the season.

It was a best-of-three series that would need only two games.  And the Sooner pitching and defense had a chance to shine.

OU’s Keilani Ricketts and UT’s Ellen Renfroe started Game 1 and it proved to be an epic battle.  Neither would give up a run through seven innings.  Or eight.  Or nine.  Or ten.

In the top of 11th, the Lady Vols finally broke through with three runs, building a lead that seemed entirely insurmountable in a game such as this.  But Oklahoma wouldn’t be denied.

With one out in the bottom of the inning, Ricketts got on with a double.  Brittany Williams’ double sent her home.  Erica Sampson came in to run for her, and stole third.  With two outs, Destinee Martinez fought through the pressure and hit a triple, plating Sampson.  Then Callie Parsons’ double on the next at-bat sent Martinez in and the score was tied again after 11.

Ricketts’ seemed renewed in the 12th and recorded a three up, three down top of the inning.  This set up the Sooners to take care of business quickly.

The speedy Brianna Turang doubled to get on.  Lauren Cahmberlain took the game to the house.  Her sixth at-bat of the game gave her the opportunity hit her 30th home run of the season.  The two-run shot gave the Sooners a 5-3 win.

Ricketts and Renfroe combined to pitch 23.0 innings and throw 368 pitches.

Michelle Gascoigne went to the circle for the Sooners in Game 2 and fulfilled her role as she pitched a complete game shutout.

As the designated player, Ricketts accounted for all the the OU scoring.  Her three-run homer in the fourth gave Gascoigne all the run support she would need.  It was the 50th home run of her career.

She also sacrificed to bring in Chamberlain in the top of the seventh as an insurance run, giving her four RBIs and the chance to shine in the only game in the postseason in which she didn’t start as pitcher.

It was the second national championship for the program (OU won in 2000), and was big for the state.  Throughout the WCWS, it was clear the Sooners were playing for Okla-HOME-a, a state that was still suffering from tornadoes that had been devastating in Moore and Shawnee and beyond.

The Sooners’ championship was a bright point for the state when many people needed a few moments to think about something else and smile.