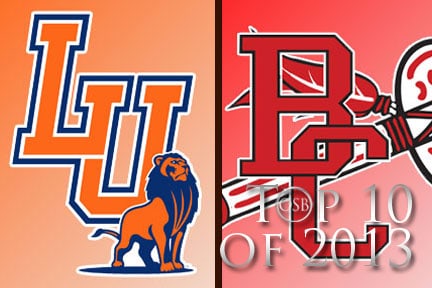 Fans of Langston and Bacone had circled Nov. 9 on the calendar as soon as the schedules were released.

With what the two teams were setting up to bring to the table, this game in Muskogee would likely be a game that would decide the champion of the Central States Football League and give the winning team an inside track to a possible playoff berth.

The game itself lived up to the billing of a matchup of the two top teams in the conference.

The home team took the early lead as then-No. 22 Bacone went up 10-0, on the strength of a 3-yard Aron McCoy touchdown run and a Nick Cannon field goal.

But the league’s Special Teams Player of the Year, David DeHarde, kicked two field goals to erase the zero on the scoreboard for Langston and give his team a little momentum going into the half.  BC still led, 10-6.

The Lions’ offense finally found its way into the end zone in the second half and threatened to blow out the Warriors.

John Hunter, the CSFL co-Defensive Player of the Year, picked off Warrior quarterback Kyle Kuban and set up his team in good field position.  Kenrick Roberson’s 4-yard touchdown run gave the Lions their first lead at 13-10.

Then the fourth quarter happened.

Langston scored twice in the first two minutes of the period to take what might have seemed to be an insurmountable lead after posting 33 straight points.  Wright ran in a TD and Roland Burgess recovered a fumble and took it back 21 yards for a score, and the Lions led, 33-10

But the Warriors weren’t ready to put this one in the books.

Kuban, a senior, rallied his team and capped a 74-yard drive with a 1-yard TD run.  And after getting the ball back, tossed a touchdown pass to Eric Horsley.  Horsley then quickly scored again, this time on a run, to put the Warriors back within four at 33-30.

Bacone would then take the lead with a nod to what the Auburn Tigers would do a little later in the month.  From his own 9-yard-line, Kuban’s pass to Reinaldo Reyes was tipped up and taken by Jamaal Surrell and in for the score – a 91-yard TD.  Once down 23 points in the fourth, Bacone had come all the way to take the lead.

But six touchdown in the final quarter (two by LU and four by BC) just wasn’t enough.  Langston provided a seventh.

The Lions started with a short field and then Wright hit Cordara Frazier from 30 yards out to put Langston back on top.  The Lions won by a final score of 39-37.

Wright threw for 255 yards and two touchdowns and rushed for 115 yards and one TD.  Kuban passed for 395 yards and also tossed in two scores while running in a third.  Bacone ended the year at 7-4.

Following this win, the Lions shutout Wayland Baptist in the season finale and completed the season on a six-game winning streak.  However, Langston was inexplicably left out of the NAIA playoff picture, finishing the season at No. 21 in the polls.