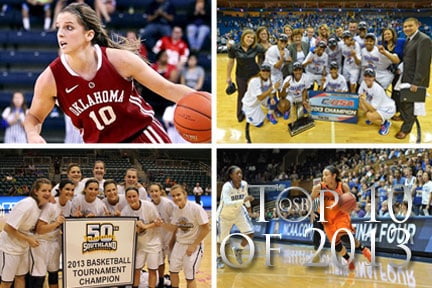 In Oklahoma, we knew we had some really good basketball teams.  The rest of the country found that out in March.

All four of Oklahoma’s Division I school earned bids to the NCAA Tournament.

• Oral Roberts got in first on the final Saturday before Selection Monday. The Golden Eagles found themselves in a rematch with Sam Houston State.  The two had split games in the regular season and shared the regular season crown in the Southland Conference.

But winning just the regular season title wasn’t going to be enough for this squad, as the program had done that twice in the previous three seasons.  Seniors Kevi Luper, Jaci Bigham and Savanna Buck wanted to dance.

The championship game went back and forth throughout (five ties and 10 lead changes) and the Golden Eagles went on top for good with about two and a half minutes left and won, 72-66. Luper was named the conference tournament’s MVP.

The first round matchup for ORU would send it to Knoxville, Tenn., to take over the No. 1 seed Lady Vols, and ORU would not go out quietly.

The Golden Eagles played strong defensively, setting a record for blocks by an opponent in Thompson-Boling Arena (10), but weren’t completely at full strength (point guard Bigham had a stomach virus all week prior and at game time).  Ultimately, Tennessee took the game, 83-62.

Photo courtesy the University of Tulsa.

• Tulsa also claimed an automatic bid a little later on that Saturday.  At the 13-16 through the regular season and the No. 6 seed in the Conference USA tournament, TU seemed the least likely to make it to the Big Dance.

But the Golden Hurricane achieved the amazing feat of winning four games in four days keep the season alive, in front of a “home crowd.”  The city of Tulsa hosted the C-USA tournament, though the games were played at the Tulsa Convention Center and the BOK Center, and not TU’s home court, the Reynolds Center.

Tulsa took down the No. 11 seed Rice (74-52), No. 3 seed Tulane (75-67), No. 2 seed East Carolina (72-59) to make it to the finals.  The Golden Hurricane actually got to wear the white jerseys for being the higher seed in the championship game, as they played eighth seeded Central Florida. TU won 75-66, to complete its improbable run.

Just like its crosstown rival, Tulsa drew a No. 16 seed in the Tourney and was sent to play Stanford in Palo Alto, Calif. And in similar manner, hung tough for a while.  In fact, the Golden Hurricane was tied with the Cardinal, 24-24, at halftime.

Oklahoma State was the fifth seed in the Big 12 conference tournament and won 59-54 over Texas Tech in Dallas.  But the Cowgirls fell in the semifinal to the defending national champion Baylor, 77-69.

OSU got into the tournament on the strength of a 21-10 record and a strong conference schedule.  As the No. 7 seed, the Cowgirls got to take on 10th-seeded DePaul in the first round.  The last time the two met was in the NCAA first round in 1991 and the result in 2013 was the same: a Cowgirl win.

Oklahoma State then met the host for its pod in the bracket, the Duke Blue Devils.  The No. 2 seed had won 19 in a row at home in the NCAA Tournament and was 15-0 in Cameron Indoor on the year.  It looked like those stats wouldn’t matter.

OSU led by 13 at intermission and by 15 early in the second half, but the Blue Devils showed why their record (31-2 coming in) was so good. A 12-0 run sparks a massive comeback and Duke outscored Oklahoma State 47-23 after the break.

• The Sooners also had to wait until Selection Monday to know for sure their NCAA fate.

The third seed in the Big 12 tournament, OU escaped West Virginia in the first round, 65-64, but like OSU fell in the conference semifinal.  Oklahoma lost to the No. 2 seed Iowa State, 79-60.

But the Sooners didn’t have anything to fear when the selection show aired.  It was just a matter of where they would play.  And for the 14th consecutive year, Oklahoma entered the Big Dance.  An at-large entry, the Sooners would travel to Columbus, Ohio, to play Central Michigan.

Oklahoma had a fight on its hands in the opening game.  OU defeated the Chippewas, 78-73.  Joanna McFarland had a double-double with 18 points and 17 rebounds, while Aaryn Ellenberg, an honorable mention for All-America, put in a team-high 22 points.

McFarland had another double-double (20 points, 16 reb.) for the Sooners as they dispatched UCLA 85-72.  Oklahoma moved on to the the Sweet Sixteen and would return “home” to face Tennessee in Oklahoma City.

The Lady Vols would face a second school from the Sooner State in three games.  It was also the second time OU and UT would meet on the season.  The result was the same.

Tennessee’s tough defense held the Oklahoma offense in check and won, 74-59.  McFarland logged her third double-double in as many NCAA games (14 points, 16 reb.) while Sharane Campbell scored 22 in the OU loss.  The Sooners finished at 24-11.

Basketball in Oklahoma has rarely had a national stage such as the one the four D-I teams earned for it in 2013.