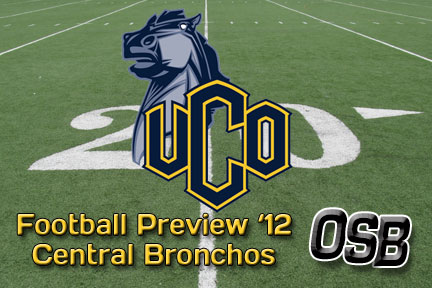 There’s a new coach in Edmond and the Central Bronchos are headed into a new league in 2012.  And UCO is hoping to put a stop to something that has gotten old quickly.

The Bronchos are in the midst of three straight losing seasons – something that doesn’t happen often at UCO.

New head coach Nick Bobeck is aware of the rich tradition in Edmond.

“UCO is one of the proudest football programs in Division II,” Bobeck said.  “We’re the fourth all-time winningest program in D-II and we’ve got two national championships.  And there is a bright future ahead of us.”

He also addressed the need to turn the ship.

“There’s going to be a learning curve and building process here.  But I think that we can turn this around in a relatively quick fashion and be able to be very competitive in one of the toughest conferences in the country.”

Bobeck is bringing some help with him.

Junior quarterback Adrian Nelson has transferred to UCO from Navarro College, where he won a national championship under Bobeck’s leadership.  Nelson looks to be the starter Thursday night in the Bronchos’ season opener.

Senior Ethan Sharp is back as well and is the Bronchos’ all-time leader in pass attempts and completions.  UCO looks to be loaded in talent at the QB position.

“He’s a really good player,” Bobeck said.  “We’re excited about him.  He’s going to be the guy that we’ve got to get the ball to.  And we’ve got to have some guys to be productive on the outside to open up the box a little bit so that he can get loose.”

The junior has had a stellar career so far and is an all-around threat.  In 2011, Birmingham had almost 900 rushing yards, eight rushing TDs and was second on the team in receptions.

Wide receiver Daniel Morrell is back for his senior campaign and will be joined by junior transfer Marquez Clark, another Navarro transplant.

The offensive line has only one returning starter, senior center Nick Garitano.

“We’re young, especially up front and we’re going to have to do some things to counteract that,” Bobeck said.  “But we have some talent at the skill positions and some older guys as well.

“We’re going to be showing multiple sets.  It’s going to be a very simple offense; we’re not going to try to “wow” anybody with our X’s and O’s.  It’s simple and we’ve got to do the things right to make sure our kids can function at a high level.”

Bobeck has faith in his staff to get his team to that place.

“I’ve got two coaches that are going to lead the offense in Chris Martin and Ryan Belcher that are doing a really nice job with the unit.

“Football is the ultimate team sport.  You have to be able to put eleven guys out there and everyone has a unique job.  The better those players are that across your board, the better you’re going to be as a football team.  We’ve got to have some guys make some plays.”

The defense is returning some experience for Bobeck.

“We’ve got two guys that played a bunch last year in Sam Moses and Herbert Byrd.  Those guys are mainstays here at UCO and have played a lot of football games.”

Moses is one of the team’s captains this season.

“There’s experience on the defensive line.  And we’ve got some at the linebacker position that have played a lot of football as well, but our backups are young.”

Bobeck will look to senior Turner Troup to shore things up at the middle linebacker position.

“We’re really talented in the secondary,” Bobeck said.  “We’ve got some kids that can play the game and that can put themselves in good situations.”

Devoris Dozier and Thomas Hill are among those talented secondary players to Bobeck referred.  Dozier had five interceptions in 2011.

We’re going to hang our hat on the defensive side of the ball, as far as creating turnovers and not giving up big plays.  If we do that, we’ll be in good shape.”

After spending a season in the purgatory of an independent schedule, UCO is moving into full membership in the Mid-America Intercollegiate Athletics Association, possibly Division II’s premiere football league and home of the defending national champions (Pittsburg State).

But Bobeck said that he believes the experience from the previous season should help the Bronchos.

“I think they played a tough schedule last year, there’s no question,” Bobeck said.  “Playing North Alabama and going out to Cal-Poly, and playing all of those teams they played last year.  There weren’t any ‘gimme’ games on the schedule.  The kids that are here should be prepared for a tough schedule.

“I don’t think there’s a ton of difference in the quality of football that will be played between the schedule they played last year and what we’ll face this year in the MIAA.  We have to make sure that our kids are playing hard and that they’re healthy and suited up each week and ready to go.”

Central opens the season Thursday night at home against Missouri Southern.  And then go on the road the next Saturday to Pittsburg, Kan., to face the Gorillas.

The entirety of the UCO schedule in 2012, and for the foreseeable future, consists of MIAA games.  And Bobeck is stressing the basics to get the most from the Bronchos.

“Go out and have fun and enjoy the experience.  If you play hard and don’t make any mistakes, you’ve got a chance to be in every football game.  And that’s what we want to do.”

Kickoff on Thursday is at 7 p.m. at Wantland Stadium in Edmond.