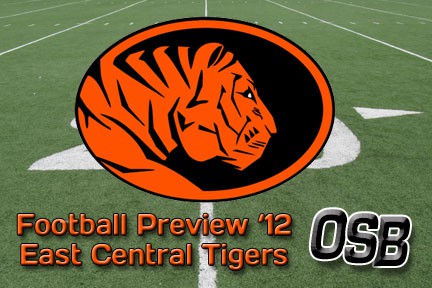 East Central completed its first season in the Great American Conference tied for the most league victories and earning the most overall wins in the GAC.

In 2012, the Tigers look to build on that momentum to take their first conference title.

That energy has been building for some time.  ECU finished its time in the Lone Star Conference two seasons ago with a North division title.

Head coach Tim McCarty is beginning his fourth season with the Tigers in a return appearance in Ada.  McCarty was the lead man at East Central in 2004 and 2005.

His first season back was a time of rebuilding and finished at 0-11.  But since that time, the Tigers have gone 13-9 and have top-tier finishes.

Tyler Vanderzee has graduated and the Tiger will have a new leader.  Sophomore Cody Miller is the likely successor to the starting role, while redshirt freshman Spencer Bond may see time there as well.

Titus Mobley and Chad Winbush combined to rush for just over 1,000 yards in 2011.  Both are back this season to continue to rebuild the ground game that found its feet last season for the first time in six years.  The Tigers had not owned a season with 1,000 net team rushing yards since 2005.

This has to be a strong point for the Tigers with all of the talent that is coming back for one more go-round.

Senior Jason Catchings, who fills the roles of both defensive end and outside linebacker, is the reigning GAC Defensive Player of the Year.  He is joined on the defensive line (when he’s there) by fellow senior Armonty Bryant, who won the conference Defensive POY awards in 2010 in the LSC.

Senior Tyler McGrew and junior Amos Cherry are standouts at the linebacker position.

Norris Wrenn is yet another senior who headlines this strong defensive group.  Wrenn not only led the team in tackles in 2011, he collected five interceptions and a fumble recovery.

With a 6-2 GAC record last season, the Tigers look simply to build on that.  ECU tied for second in the preseason GAC poll.

The season opens Thursday night in Maryville, Mo., against Northwest Missouri State, a perennial power.  The remainder of the schedule consists of GAC rivals.  ECU closes out the season at home with archrival Southeastern.