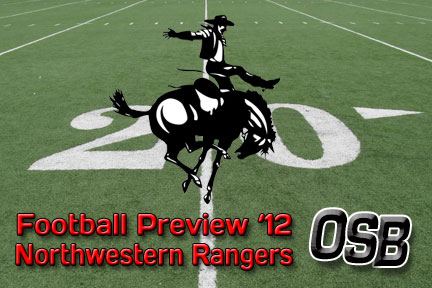 A new era begins for the Northwestern Rangers this fall.

From the national level (first year of transition NCAA Division II) to the conference level (new membership in the Great American Conference) to the team level with new head coach Alan Hall, things are changing in Alva.

But the Rangers have much on which they can build.  The program has tradition and there are expectations that this year’s football team will continue to strive for excellence.

Hall is concentrating on a few keys to reach that point.

First of all, we’ve got to come together,” Hall said.  “We’re basically a new team.  Probably about 75 percent of the kids in camp right now are first-timers.  Not necessarily the first time on this level, but they may be transfers.  And we’ve got to get the team to come together as one.

“We’ve got to get our systems taught – offensively, defensively and on special teams.  We’ve got to make sure that we’re sound fundamentally and schematically, as well.”

Hall also pointed to the additional adjustments his program must make, beyond those of simply installing a new coach and new philosophy.

“The big thing is to explain even to the returners that we are moving into a new realm,” Hall said.  “We’re going to be competing at a new level, doing things for the first time that they haven’t done here before.  We’re going to seeing competition the likes of which they’ve never seen before.  And with every move up the ladder, it constitutes another jump in the work ethic.

“There are going to be a lot of situations in which we’re going to be the underdogs.  Whereas for the last decade or two, Northwestern has many favored much of the time.

It’s not as though the cupboard at NWOSU is bare.  There are a good number of players in the right spots that were a part of the 2011 squad that went 3-2 in the Central States Football League, including starting quarterback Kyle Jech.

“It’s always helpful when you’ve got a quarterback that has played and been under fire,” Hall said.  “Especially when you’re heading into a new level of play.  That brings stability and continuity to the rest of the team.”

Jech is coming off a season in which he passed for over 2,000 yards with 16 touchdowns and only seven interceptions.  That kind of performance could be repeated in the spread offense that Hall brings to Northwestern.

But this is not to overlook the running game, as Jared Jackson has come out of the shadow of Nate Guillory to have a great junior year.  And he could shine again in 2012.

“Jackson has had an impressive career here,” Hall said.  “And it so happens that the bulk of our experience is at the quarterback position and the running back position.  So we may be a bit skewed toward the running environment, but we’re going to keep the same spread concepts and try to spread the field.”

Andrew King and Taylor Hooper should be a key receivers in the spread for the Rangers.

Hall is a former quarterback and the offense is his.  But the Rangers’ defense is in good hands.

“With the four defensive coaches I have (John Falvey, Charlie Giangrosso, Lonnie Messick and Larry Parker), you’re probably looking at 115-120 years of defensive experience and they’ve done a great job of getting the kids ready to play,” Hall said.

“And I think that the kids are buying into it.  And we’re looking for great things out of them this year.  And I let them do their work and I try to stay out the way.”

NWOSU will show a 3-5-3 look with Charles Snider returning to the defensive line and Michael Harmon playing a strong role in the linebacker position.

Hall said that there needs to be improvement in all phases of the game, but he anticipates and exciting season.

“It’s an uphill battle, but the kids are excited about it and ready to attack it,” Hall said.  “And we’re going to do the best we can to get after it.”

Northwestern opens the season on a Thursday night.  The Rangers will play on the road at Ouachita Baptist on Aug. 30, in their first Great American Conference game.

The home opener will be against Colorado State-Pueblo nine days later.