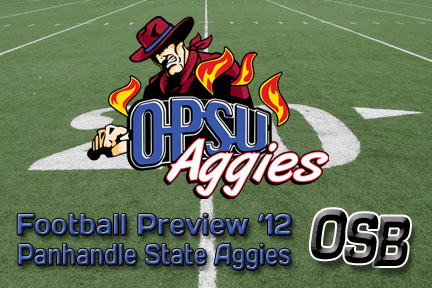 OK, that’s how the preview might have started last year as well, but there does seem to be a renewed sense of enthusiasm on the campus this season at Goodwell, Okla.

Russell Gaskamp has taken the reins as the head coach of the Aggies and said that he is pleased with the response he has seen.

“So I think we finished out the summer really strong.  The kids are really excited ant they’ve been working hard.”

And it’s gone for the Aggies as any new venture might.

“There have been ups and downs,” Gaskamp said.  “We’ve been implementing a lot of new things on offense.  The defense has had it a little easier with Coach Thompson still around.”

Gaskamp retained Jesse Thompson as the defensive coordinator for the Aggies and it has also helped to have eight starters returning on that side of the ball.

“But offensively everything has been new.  The first three or four days were a little rough, but every day has gotten better and better.”

“The main job of any offensive staff is to use the strengths that you have and circumvent your weaknesses,” Gaskamp said.  “We’re going to use the personnel we have and be creative wherever we might need to be.”

Gaskamp is coming in with a quick style, no-huddle offense and will also be replacing last year’s starting quarterback and leading rusher, who have departed via graduation.

“Right now, we’ve got a battle at the quarterback spot with two transfer guys: Justin Billiot and Caleb Holbrook and they have gone in as 1 and 1A.

“They’re competing hard every day and when we get to the first game, we’ll decide who the starter is.  But that’s starting to separate itself out.”

OPSU will have a choice at tailback as well.

“Justice Patterson is a really good football player,” Gaskamp said.  “They did some different things with him last year, but he’s a tailback.  And Chris McClendon, who redshirted last year, is a big back.  We feel very confident that we’ve got two guys at tailback who are high level players.”

On the offensive line, the Aggies signed a transfer to fill the role at center, Cameron Hickey.  And there’s experience on the left side of that line in senior Rantz Trayler and junior Marcus Dimando, who Gaskamp said will be leaders on the team.

Senior Tim Hollingshed and sophomore Nick Collins are returnees who saw plenty of action last season and will be among a number of receivers that can benefit in that spread offense.  “We just have to put our kids in a good position to be successful.”

Gaskamp said there will be only a small change philosophy and that the staff has high expectations for its defense.  The makeup of the defense itself won’t change much, either.

“Essentially, our entire starting defensive line is pretty much returning,” Gaskamp said.  “Three of the four linebackers are returning and three of our secondary players are returning, with a lot of other players with some good experience are coming back as well.

“It’s a veteran group.  They may have to bring the offense along a little bit for the first part of the year.”

Among those returning to the Aggie defense are junior linebacker Ronald Seals, who led the team in sacks.  Senior linebacker Trever Lutz and sophomore defensive back Justin Fogle each had a pair of interceptions for the Aggies and were among the top in tackles.

“And the one thing I can tell you is that we will be aggressive.  We want to run a defense that guys want to be recruited to and want to play in.”

OPSU is an affiliate member of the Central States Football League, which consists of NAIA schools, and as a Division II school is not eligible to win the championship.  Maintaining independent status makes it difficult for the Aggies to get into the playoffs.

“Essentially, we would have to have such a good season that it would be impossible to keep us out,” Gaskamp said.  “That is a challenge here and yeah, that’s tough.  And we can’t win the conference championship, which is tough, too.”

So Gaskamp and his staff point the team to other things for which to strive.

“First, we want to win all of our home games.  We want to create a home atmosphere that’s great to play in and that our guys can be excited about.

“And we want to win all of our games against teams from Oklahoma.  We want to be the Oklahoma ‘state champions.’”

And after back-to-back seasons of breaking in a new coach, Gaskamp sounds as though he would like to be in Goodwell for a while.

“The biggest deal for us this year is that we want to be a better football team,” Gaskamp said.  “If we can do that, we will accomplish the things we want to.  And our senior guys will feel good about what they’ve done and what they have been a part of and to help us build toward the future.”

OPSU opens the season on Sept. 1, in Rolla, Mo., against Missouri S&T.  The home opener is the next weekend as the Aggies host Lindenwood-Bellevue.  And the season ends with three consecutive home games, capped by a visit from Langston.