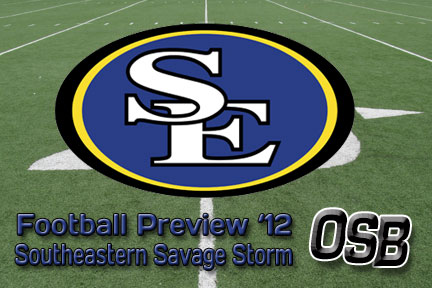 Following two big wins to open the season last year, the Savage Storm lost much of its ferocity and seemed to dissipate as SOSU lost the next eight games, finishing at 2-8.  Most of the games lost were decided in the final minute or few seconds.

Storm head coach Ray Richards said that he looking positively at the new opportunities the 2012 season will provide.

“This is a new year and that’s good,” Richards said.  “We have a lot returners from that (2011) team and they have some good experience.  Maybe some of the mistakes that were made won’t be made again this year.”

Injuries played a big role in many of the Storm losses as well, with the leading rusher going down in Week One and starting quarterback and top receivers to follow just a few weeks later.

Entering 2012, junior Jercolby Bradley takes the helm at QB, and brings with him mobility that hasn’t been seen at that position in nearly a decade.  This opens things up a bit for Richards’ offensive scheme.

Obviously, you incorporate his abilities into our offense,” Richards said.  “The offense is still the same, but we just do more things with him.  We’ve had the capabilities of doing those things all along in our offense, we’re just going to be doing more of them.”

Sophomore C.J. Kirk started last season third on the depth chart, but capitalized on promotion through injuries to Jamaal Evans and Brandon Bryant and ended the season with over 700 yards on the ground.

“C.J. is a good running back,” Richards said.  “We’ve also got a couple of other kids in Ladarius Abrams and Billy Hashaway that are really capable.”

Abrams and Hashaway were redshirted last year and come in a freshmen ready to go.

Anthony Foster and Quentin Morris are back at the receiver roles and Richards intends to utilize another tight end this season alongside standout Ryan Shelley.

“He’s not really new, but you haven’t seen much of Krishon Daye,” Richards said.  “He’s our other tight end and we’ll be using him quite a bit.

“All of our other main receivers played last year, they’re just a year older.”

And Richards said he hopes a year makes a difference.

That goes for both sides of the ball.

“We’re a little better on defense than we were a year ago,” Richards said.  “We’ve got eight starters returning.  And we have more depth in certain areas – the defensive line, at cornerback and at linebacker.”

Coby Ragsdale and local product, Barrett Shirey, should see plenty of action, as well as Dominique Turner, who Richards said can be a great player.

Richards spoke of other returnees – Izzy Eziakor at free safety, Eric Walker at cornerback and Emmanuel Jackson at the rover spot who “are all coming along well.”

Jacobi Crowley and Jacoby Sanders are sophomores who were called into action last season and should see additional field time this year.

“We’ve got a bunch of guys who are coming back and should know what they are doing.”

Southeastern went 1-7 in Great American Conference play in 2011 and have been picked to finish in a tie for sixth in the league this season.

Richards said that having a year under your belt with these “new” conference foes can make a difference.

“It’s not new anymore,” Richards said.  “We have a little more familiarity with them, which is always helpful.  You know what you’re getting with the talent levels they will bring and the schemes, too.

SOSU opens the season against its only non-conference opponent.  The Savage Storm travels to former Lone Star Conference rival Texas A&M-Commerce on Sept. 1.

They return to Paul Laird Field after a bye week to host Southern Arkansas in the home opener.

Southeastern has only four home games this season.  The Savage Storm closes out the regular season on the road against archrival East Central in Ada.