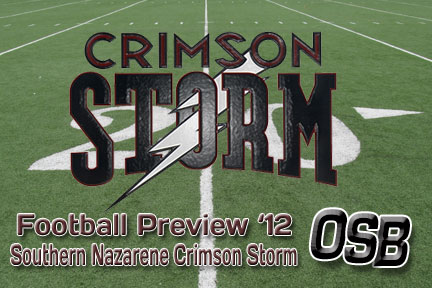 Southern Nazarene is coming off the best season in school history in 2011.  And although head coach Mike Cochran is pleased with what his team accomplished, he is making sure that the focus is ahead, and not behind.

“Last season was a lot of fun,” Cochran said.  “We had a good football team.  Our guys played hard.  It was certainly one for the history books, but that’s exactly what it is now.  It’s history, and we’re on to 2012.”

SNU finished the year with an overall record of 9-3, while going 4-1 in the Central States Football League and claiming a share of the conference title.  The Crimson Storm also made their first appearance in the NAIA playoffs.

The Storm garnered the No. 12 spot in the postseason rankings and Cochran was named CSFL Coach of the Year.

This season will present a new set of challenges.  SNU is in its second year of the three-year transition process to NCAA Division II and is officially done with the NAIA.  The Storm is also playing in a new conference, taking on a full Great American Conference slate.

“It’s an excellent football conference,” Cochran said, citing also the proximity of the schools in Oklahoma and Arkansas and the rivalries to develop.

The college career of standout SNU quarterback Brady Wardlaw, CSFL Offensive Player of the Year, is also in the books – only because of graduation – and the Crimson Storm is looking to fill some big shoes.

“The job is open up until the first game,” Cochran said.  “We’ve got two returners in Dylan Terry and Greg Austin that are the front-runners.  But we’ve got a good group of young quarterbacks that are learning the offense right now and will have a chance to show what they can do.”

And whoever gets the nod will have not just one or two receivers to get the ball to, but a whole unit that has gained the approval of its coach.

“I’m excited about our receivers as a group,” Cochran said.  “Jakell Everhart had a good year for us last year and he just continues to get better.

“Alex Reed has played quite a bit in the last couple of years and had a great spring.”

Returning starter Timmie Fuller and transfer Cedric Johnson will also see action and Cochran is also complimentary of the group of young receivers that are learning his system.

The ground game is not to be forgotten in Bethany, though.

“This offense is designed to spread the ball around and we’re definitely going to go with what works,” Cochran said.  “But I’m pretty excited about our group of tailbacks.

“We’ve got a really strong group among Derick Perkins, who was first team all conference, and Chris Hunter, a freshman, and Kwame Tate, a transfer.  They’ll get plenty of touches.  And like last year, there were times we threw it to them out of the backfield.”

And the area of attack from the Storm offense will be predicated upon the looks from the opposing defenses.

And there are a couple of factors that Cochran likes about his own defense – speed and experience.

“We got a lot of team speed.  And it’s going to be a factor, but this is also a very experienced group, too”

It’s a unit with not only experience, but also success.  Some might say that SNU scored twice as many points last season as its opponents.  But the defense might boast that it gave up less than half as many points as the Storm put on the board.

Among the returnees are first-team all conference selections in linebacker Michael Hicks (coming off a phenomenal freshman season) and Matt Pruitt (who had back-to-back games with two interceptions).

It will be tough for the Crimson Storm to top the success the team saw in 2011, but the blueprint is there.

And Cochran is going into the season with the confidence that should inspire his team to want to succeed.

“It’s going to be a lot of fun to play against these teams, and obviously there are some good football teams.

“We’ll have a lot of respect for our opponents, but certainly, we’ll fear none of them.”

Southern Nazarene plays only two true home games in 2011.  They open the season on Aug. 30, at Henderson State.  The home crowd will get its first chance to see the team on Sept. 22, against Harding.