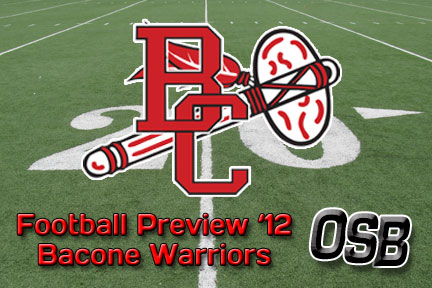 Getting things going on a positive note early in the season is important to the Bacone Warriors in 2012.

So it’s symbolic that Bacone’s schedule includes the earliest start of any of the Oklahoma schools.  The Warriors open the 2012 schedule with a trip to Tabor College in Kansas on Aug. 25.

Bacone would like to erase the memories of last year.  The team got off to an 0-3 start and dropped five of its first six games.

Head coach Trevor Rubly is now in his second season at the helm in Muskogee and said that he recognizes at least part of the reason behind his team’s early season setbacks during his first year.

“Change in a system and a program takes a little time,” Rubly said.  “We came in with high expectations, but we started off a little slow.  The kids bought in, although it took a little longer than expected.

“The first time the new offensive coordinator met with the offense was during two-a-days and it took a little while to get to know the terminology and plays and concepts and we struggled some at the beginning of the season.

“But as the season progressed, the kids started to buy in and get more comfortable with the offense.  And it shows.  We won four of the last five games.”

They capped the 2011 season with a victory over NCAA Division II Oklahoma Panhandle and finished third in the Central States Football League.

But the sights are set higher in 2012.  And Rubly said that he is aware of what he has to work with this year.

“Right now we are really athletic,” Rubly said.  “We’ve got a lot of good guys and it’s up to us as coaches to get them right and in the right place and to do what we ask of them.  And we’ve got some young players that just need to step and be leaders.

“And I know we’ve got some leaders in this group.”

That will be a must if the Warriors are going to succeed because of all the offensive production that was lost through graduation.

Gone are the top two quarterbacks in Mike Cook and Geo Montgomery, who combined to pass for 2,252 yards and 25 touchdowns.  Montgomery was also the team’s leader rusher with 491 yards.

Junior Kyle Kuban is the front-runner at the QB spot coming out of spring ball.  Senior Ryan Morrow has returned to the Bacone fold and had the best spring game for the Warriors.  Kuban and Morrow are going into the fall camp as 1-2, but are being pressed by some of the younger recruits.

The offensive numbers from last year’s statistics didn’t exactly paint an accurate picture, with the Warriors picking up nearly 1,000 yards more through the air.  This wasn’t the original gameplan. But with Montgomery’s ability to move the ball on the ground, defenses stacked the box and dared him to throw it.  He took that challenge and Bacone continued to get better as the season wore on.

And although Rubly would have preferred to go with a ground attack, he took a pragmatic approach.

“We would like to run the ball and stay balanced as best we can, but we’re going to take what the defense gives us,” Rubly said.  “It depends on who we’re playing.  We’ve just got to go with what works.”

Seniors Tyler Thomas (Second Team All-Conference) and Isaac Twenty will also be called on to carry the load this season for the running game.

On the defensive side of the ball, Rubly likes what he sees, especially up front.

“Our D-line is coming back pretty strong, and it will anchor our defense,” Rubly said.  “We have Dustin Sherer on one edge and Paul Mpagi on the other edge, as well as Jormeh Mowarin, who was second team All-Conference last year.”

The Warriors are proving to be a good landing spot with numerous transfers coming in to play for Rubly.  Among those is Daniel Shield, a senior linebacker who is already having an impact in camp.

“Daniel has transferred in and is really taking over as a leader on our defense and he reminds me a lot of Prentice Joseph (First Team All-Conference).”

That’s a favorable comparison, as Joseph was a team leader who was second on last year’s team in tackles, tackles for loss and interceptions.

Additionally, Bobby Owens is coming back at one side in the linebacker position, though Rubly is still looking to see who will fill the spot on the other side.

The Warrior secondary will be a place in which Rubly will have to sift through young players to find ones to fill the holes left from last year’s squad.  Only starting defensive back Chase Rettig returns to the secondary for 2012 and Dwayne Smiley, who filled spots last year and got a lot of time.

“We’re young in the secondary, but I’m up for the challenge,” Rubly said.  “And I think that overall, athletically, we’re better defensively than we were last year.  I’m excited about it because I’ve got a lot of guys that can get the job done.”

The CSFL will look a little different in 2012, and Rubly knows that each team will present its own challenge, though a couple of familiar matchups won’t take place this season.

“Langston is probably at the top, especially with Northwestern and Southern Nazarene gone (to NCAA Division II).  We’ve got a big game against them in Week 3 down in Booker T. Washington Stadium in Tulsa.  And that’s a big task.

“But we know that the other teams will give us tough competition.  We’re really excited about the conference and we’re going to go in and take each challenge as it comes for what it is.”

The Warriors take on Langston on Sept. 8, and then face the remainder of the conference slate in October.