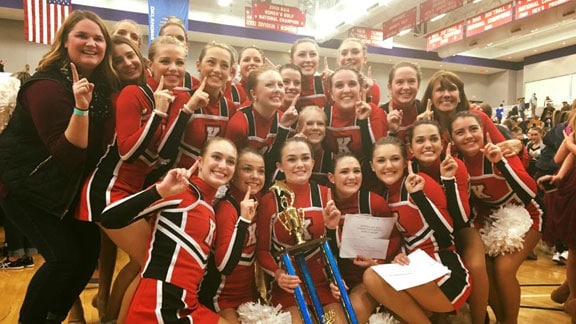 The court at Abe Lemons Arena was once again the focal point for dance competition as pom teams, spirit squads, dance teams and more converged at Oklahoma City University on Friday and Saturday.

OCU once again was host for the Oklahoma State Dance Team Directors Association Dance Team Championship and more than 100 schools and all-star programs came out to participate.

The OSSAA does not sponsor a statewide competition for dance, so the OSDTDA provides a venue and 2016 marked the 20th year for the event.

Kristi Posey is the president of the executive board for the OSDTDA and said the competition follows much of the same guidelines as if the competition were an OSSAA event.

“We have kids from 2A, 3A, 4A, 5A and 6A schools and they compete in five categories,” Posey said. “They can do pom, jazz, kick, hip hop or a mix, which allows them to pick any three of the four other categories.

“We divide them as they would be classified in football with 2A and so on, and award state champions in each division.”

The state competition has categories for school teams and for studio all-star teams, as well, with kids from kindergarten age all the way through high school that compete. There are varsity teams, junior varsity teams and more down to the sixth grade from Oklahoma schools.

“The dance studios compete on Friday and then all day Saturday it’s the schools competing,” Posey said.

Bishop Kelley was one of those schools and the Spirit Squad competed in and won the 5A Pom division. Assistant cheer coach Katherine Devonshire talked about what it meant to win the championship after a second place finish the year before.

“Going in, we had a really good mindset and just really wanted to go back and compete,” Devonshire said.

“Getting first place was obviously a goal. But the girls worked so hard and did such a great performance when it came down to it and still they were so shocked and excited. It was surreal.”

And Devonshire, who works with the longtime head cheer coach Kim Ritchie, talked about part of what went in to the performance for a group that is a multi-faceted unit.

“We’re the Bishop Kelley Spirit Squad, because we’re not only cheering on the sidelines, we’re performing halftime routines and basketball events and football events,” Devonshire said. “So we’re both – a pom squad and a cheer squad.

“We’ve had only a few weeks to learn our routine, that is in between cheering at basketball games and football games and remembering the other routines. I’m just so proud of them.”

Bishop Kelley had eight seniors on a group of 20 that performed on Saturday.

Below is a list of the results from the high school portion of the competition: