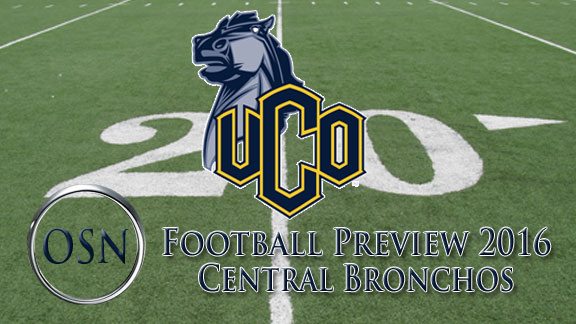 In the last two years, the Bronchos have put together back-to-back winning seasons, going 15-9, and finished each with a postseason bowl game. The next step this program wants to take is a trip to the playoffs. There are so many players with experience returning, it’s difficult imagining this group not being in the mix for a playoff spot.

Central graduated only two players from the entire two-deep on offense from the end of the 2015 season. And that doesn’t even include the return of junior running back Jake Gandara, who was injured in last year’s season opener. He’ll be joined in the backfield by junior Clay McKenzie, who ably stepped into the starting role and put together a First Team All-MIAA performance rushing for 1,499 yards. There is depth at the quarterback spot with senior T.J. Eckert, an all-conference QB in ’15, and junior Chas Stallard, honorable mention all-conference QB in ’14. Senior J.T. Luper, who led the team in receptions and was on the All-MIAA team last year and fellow senior Connor Pulley will be back and reliable targets as receivers. Senior center Brandon Waggoner is a three-year starter and has garnered All-MIAA attention in each of the three previous seasons.

Senior Deontay Wilson will be back in the middle of the defensive line this season, along with junior Collis Walker. Ben Jones is back for his senior season and the linebacker is the leading returning tackler from last season, as he had 51 tackles, a team-leading 5.0 sacks and an interception. The secondary will see changes with three of the 2015 starters having graduated. The lone returning starter is junior Omari Cole, while junior Trent Ellis could see time at free safety.

Senior Seth Hiddink was named MIAA Special Teams Player of the Week three times in 2015. He is now the single-season and career leader in field goals made with 17 and 43, respectively. Senior Christian Fulham is back for punting duties. Luper led the team last year in both kick and punt returns.

The MIAA schedule shifted in 2016 and the Bronchos open the year differently this year. With a healthy squad, it is unlikely UCO will open 0-4 again. And with the momentum of what could be a solid start, the Bronchos could put themselves in a good place going into the middle of the schedule against perennial powers Emporia State and defending D-II champion Northwest Missouri, which has to come to Edmond this year. Central should be high in the MIAA preseason rankings and be playing beyond early November once again this year.