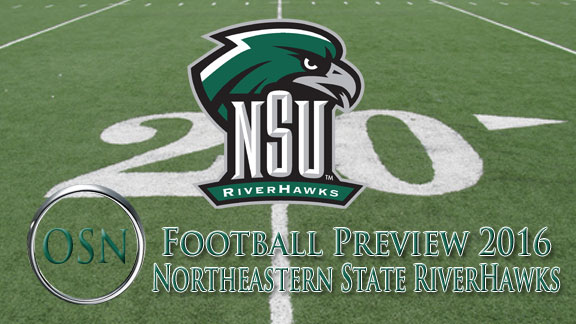 The RiverHawks won three games in 2015, which was more than the previous two years combined, and look to be a team on the climb back up. But it hasn’t been an easy road. Injuries and the challenges of facing a tough MIAA schedule each weekend have taken a toll. But Robinson is heading into his third season at the helm with a crew that is being built around his plan – to get bigger and stronger.

Quarterback Kevin Pantastico returns for his senior season to lead the RiverHawks on offense. For the first time since 2009, running back Joel Rockmore is not on the roster. Senior Cody Busby may step into the lead role in the backfield, and NSU fans may get used to new names like freshman Keaton Burroughs. Michael Davis put up an all-conference performance in 2015 as a sophomore. Junior Zac King is the team’s leading returning receiver, whose numbers were similar to senior Matthew Butler, also back for 2016. And Prince McJunkins, coming off injury, should be a strength for the receiving corps as well. And the O-line is anchored by 6-foot-3, 330 pound senior Jordan Baldwin.

Quincy Dotson brings strength to the defensive line and was an honorable mention All-MIAA player in his redshirt freshman season in 2015. There is a lot of youth for the RiverHawks at the linebacker position and all-around player and senior Kenneth Davis will need to provide leadership. NSU brings back skilled defenders in the secondary with seniors Steffon Herd (111 tackles, five sacks in ’15) and Darian Morris (93 tackles, four interceptions in ’15), who both received all-MIAA honorable mention.

All 73 of the RiverHawks’ punts last season were kicked by Garrett Powell, a wide receiver who graduated in 2015, or by one of the quarterbacks. And no kickers or punters were in this season’s signing class. Reshirt shirt freshman Payton Roberts should get an opportunity as a punter, while senior Eddie Garcia, who was 6-for 13 on field goal attempts and missed only one extra point attempt last year, is the likely candidate to be the kicker.

Some things don’t change. The MIAA schedule is still going to be tough. And injuries can’t really be planned for. However, the RiverHawk roster keeps getting bigger and deeper. The offense will have a different feel without Rockmore, but even so will have to have fewer turnovers – NSU had a league high 18 interceptions in 2015. The RiverHawks were also most-penalized team in the MIAA last season. On defense, the RiverHawks would likely not want their two star defensive backs to lead the team in tackles, meaning the ball is getting that far down the field.
But again, this is a team that comes into 2016 with wins under the belt from the previous year. If NSU can pick up a couple of wins in the early season that were tough, close losses last year, it bodes well to make some noise throughout the remainder of the schedule.