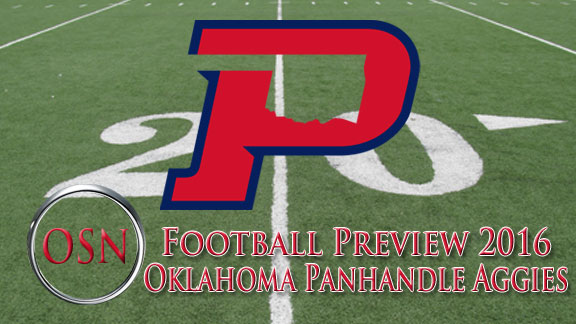 Oklahoma Panhandle heads into full conference season of Division II play for the first time since making the transition from the NAIA. And the schedule is not an easy one as the Aggies take on tough Lone Star Conference competition. OPSU was at .500 last season with a 5-5 record and has been right around that mark in Gaskamp’s tenure (20-21 in four seasons). The Aggies’ offense has been a force of late, averaging more than 43 points per game over the last two seasons.

Shane Truelove returns a senior to the helm at quarterback, after completing more than 56 percent of his passes and connecting for 17 passing TDs in his junior year. He is also the team’s leading returning rusher. Senior running back Rod Moore won’t be sharing the load with Chris McClendon this season and will have an opportunity to shine in the backfield. Junior Devin Williams led the team in receptions and receiving touchdowns in ’15 and the Aggies will also get back senior wide receiver Andrew Hernandez. Four of the five starters from the O-line are back, including seniors Diego Arenas and Alston Hadley, and senior J.B. Frontz returns as well.

It will be a younger defensive unit in 2016. Cortney Stinnett is the lone senior returning on the line. At linebacker, junior Nigel Hasty is the team’s leading returning tackler and junior Shledon Catley led the team in sacks. Senior John Libby will be back in the secondary, as well as sophomore Byron Edwards, who had come into a starting role late in his freshman season.

Sophomore Jacob Test averaged nearly 37 yards per punt in 2015, while placing 12 inside the 20.

OPSU is a team in a new league. It’s unlikely the Aggies will be favored in any LSC game this year against a team that was already a member prior to this year – Western New Mexico and Texas-Permian Basin are also new to the league. The Aggies are going to have to prove themselves, as they have lost 15 consecutive times to teams currently in the LSC (the last win was a 20-17 victory over WNMU in 1999). The offense returns eight starters, but the defense will have grow up quickly, especially with two FCS opponents to open the schedule before heading into the tough LSC slate.