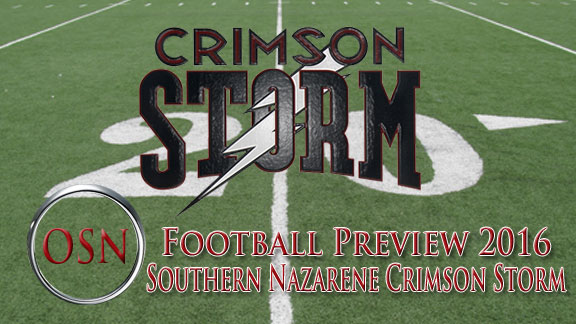 Only four of the 15 college football programs in Oklahoma ended the season with a win – Central, Northeastern State, Southeastern and Southern Nazarene.

And for SNU it really made all the difference. It kept the Crimson Storm from going a third consecutive year with a zero in the win column.

But with a small degree of momentum and another coaching change, how will the Storm go into 2016?

James Mauro is back at quarterback for his senior season. The D-I transfer threw for 1, 135 yards and six touchdowns last year. He is backed up by Hinton product sophomore Jacob Spady or senior Alec Laffoon, who is coming off an injury in the last year’s season opener. The Storm didn’t get to see the full potential of running back Terrance Olds in 2015. If the junior can have a breakout season, it will go a long way for an offense that hasn’t produced much in recent years. Sophomore Quincey Whitfield should also be big in the backfield. Senior Johnathan Martin and sophomore Elden Coleman accounted for four of the six receiving touchdowns in 2015. And all of this comes together behind an offensive line that brings back everyone from the two-deep last season in all five spots, including Will House, starting left tackle that SNU hopes can have an injury-free season this year.

Seniors Gennard Johnson and Jordan Harding are solid in the middle of the defensive line and return for the Storm in 2016. There will be new faces stepping into starting roles in the linebacking corps, including sophomore Myles Roll, who brings back the most experience from last year in an SNU uniform. Roll was also the team’s punter. Derrick Carmouche, a senior cornerback, leads the Crimson Storm secondary into the new year and had 50 tackles and three pass breakups in 2015.

Johnathan Martin is likely to have return duties again and stepped up in 2015 averaging 16.0 yards per return off kickoffs. SNU had only five punt returns last year and Martin had four of them. Carlos Anguiano is a bright point and could factor in big in scoring. The sophomore was 6-for-7 in field goal attempts in his first season in Bethany.

Andy Lambert does have his work cut out for him in his first season in Division II. He will be the third head coach for the Storm in three years. But he does have a reputation for turning programs around. the turnaround will have to take place on both sides of the ball. However, for the Storm to be able to be in the games to the end, they will have to put points on the board – and early, not late. Prior to the 33-32 overtime win over Oklahoma Baptitst in the season finale, SNU averaged 9.2 points per game. The large amounts of points given up will likely lessen as the Storm controls the ball more.
With the talent coming back and a fresh new approach, it is reasonable to look at this team as one that can pick up wins (plural) in 2016.