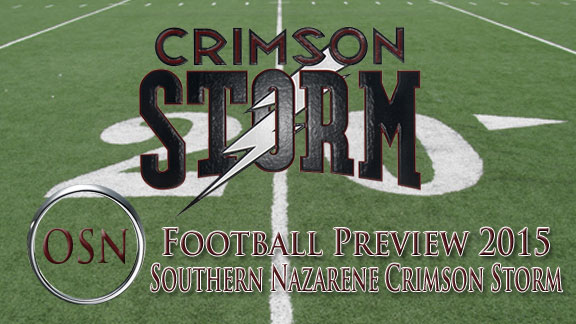 Saying the Crimson Storm have struggled during the last two years is a fair-sized understatement. SNU hasn’t won a game since the season finale of the 2012 season.

But changes have been made in the offseason, with the most visible being the promotion of defensive coordinator Craig Hubbard to the position of interim head coach, following the resignation of Mike Cochran in June. 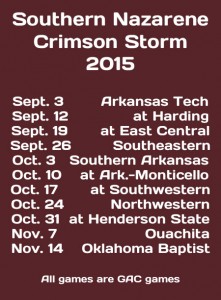 Hubbard has been getting a lot done in a short amount of time in the transition and said he feels good about where the program is heading into camp, with the recruiting class, the transfers and the knowledge of what almost was in the past.

“I’m excited and the guys are excited,” Hubbard said. “You can feel the excitement. The coaching staff has it and it’s been filtered down to the players because they realize how close they were to getting some wins last year because of a slow start or just not finishing.

“A fast start always helps you finish. So we’re going to concentrate on that and have a lot of competitions to start practice to get the juices going. And hopefully we can start games more explosive than we did last year.”

Although it is his first season as the lead man in Bethany, Hubbard is in his 10th season with the program. And he said he knows there is work to be done on both sides of the ball.

Three players are still battling for the QB spot heading into camp: James Mauro, who saw the bulk of the action last year; Alec Luffoon, the team’s leading returning rusher; and redshirt freshman James Spady. D-I transfer Terrance Olds and freshman Quincey Whitfield both had good showings in the spring and look to take the bulk of the carries, as Lorenzo Alexander has transferred out. Hubbard said he expects big things from the receivers to stretch the field, but Johnathan Martin and reshirt freshman Lakeem Christmas are also good spot receivers. The strength of the offense could be the offensive line with junior Will House at left tackle leading the way, along with juniors John Clark and Hunter Baskett also expected to stand out. Josh Norman is the offensive coordinator this season for the Storm.

Three of the four starters from last year’s team graduated, but Jordan Harding is coming back from surgery to play a part this season. Hubbard said the linebacking corps should be the strength of the defense and bring experience – senior Larry Butler III, who is getting some looks to play at the next level, will step in as the middle linebacker and fellow seniors Blake Giles and Konner Bent help to make up that unit.Madison Bunch and Derrick Carmouche, who reshirted last season as a sophomore are expected to be solid at the corner. Billy Sexton is in his seventh season at SNU and will succeed Hubbard as the defensive coordinator.

In 2014, the Crimson Storm made one of two field goal attempts – for the whole season. “I hope to beat that in the first game,” Hubbard said. He signed Carlos Aguano, a student from Spain, who was a foreign exchange student in high school in Arkansas.

The fan base at Southern Nazarene needs something to cheer about and it could get at least a degree of that this year. The parity in the GAC is big and even many of the upper tier teams in the league had wins that could have gone either way last year.

Hubbard is looking for success on the field, but as the new man taking over a team that went winless last season, he provided perspective.

“Obviously, we want to go out and get as many wins as possible, just like any other team,” Hubbard said. “When I look back on the 2015 season, I want to see us not leaving those opportunities out on the field, but to be able to capitalize on every opportunity that we get.”

“You never know which play is going to be the determining play in a football game. With the wins and losses, and how our kids act on and off the football field and in the community, capitalizing on every opportunity is what I’m going to look at.”

After the season opener against Arkansas Tech on its new field on a Thursday night, SNU face three tough GAC teams to follow. Win or lose, if the team can make it through September strong mentally, there will be opportunities in the middle of the schedule to make some noise.

Expect the Crimson Storm to break into the win column in ’15. How many wins likely will be determined by Hubbard’s team’s strong starts and then being able to hold on and finish.