OSN Player of the Year Tucker Named to All-Freshman Team 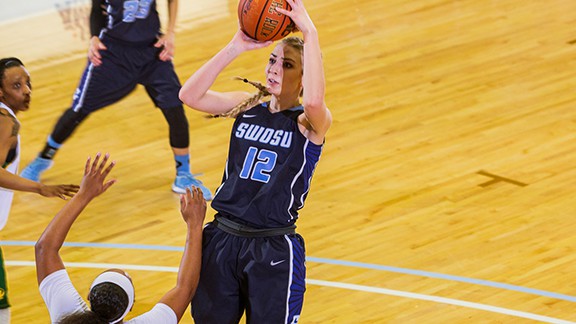 Southwestern's Hailey Tucker is on a list of the top ten freshmen in NCAA Division II (Photo: SWOSU Athletics)

WEATHERFORD, Okla. – Standout SWOSU guard Hailey Tucker has been named to the All-Freshman Team by Division II Bulletin, an honor bestowed upon just 10 freshman from around the nation. The outlet announced their postseason honors on Monday.

Tucker led the Lady Bulldogs as they finished with their third 20-win season under the direction of coach Kelsi Musick and advanced to the Great American Conference Tournament Championship game for the fourth time. She led her team in scoring, averaging 15.4 points per game and hit 81 three-pointers, the second-most in a single season in school history, while also ranking second on the team with 177 rebounds and 43 blocked shots. This is the latest honor for Tucker, whose full list of accolades can be found below, and she becomes the Lady Bulldogs first All-Freshman Team honoree as members of NCAA Division II.

Since 1993, Women’s Division II Bulletin has been the leading publication covering Division II women’s basketball. Included in their issues is up-to-the-minute news, regional reports, standings and records for all Division II teams, coaching profiles, plus player and coach awards. The D2 Bulletin Postseason Review awards a national Coach and Player of the Year along with All-America teams and an All-Freshman team, which can be found below.