OSN Poll – What was the most impressive performance in college volleyball this weekend? 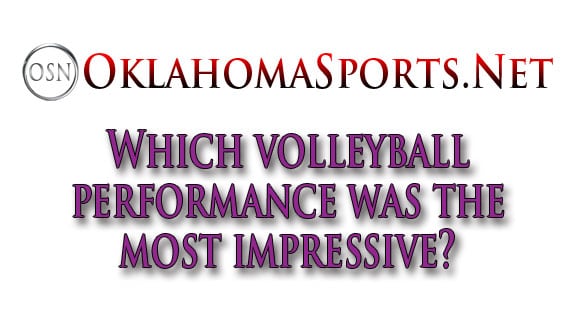 College volleyball in Oklahoma hit full stride this weekend as all collegiate levels now have their seasons started. Here’s a list of some of the best performances, both team and individual. Which was the most impressive?

Vote here. And let us know if we missed one by commenting.

Which volleyball team had the most impressive performance this weekend?

East Central Tigers – ECU lost its first two matches in the SCC, but won the next two with clutch five-set wins culminating in two-point wins in the fifth set each time

Jenna Gillean, Cameron – The sophomore powered the Aggies to their only win of the year so far, with a career-high 21 kills and a double-double with 11 digs

Laura Milos, Oral Roberts – The junior had 70 kills in four matches (all wins, and ORU has now won five straight) and had 6.76 kills per set; was UCA Invitational Tourn. MVP

Manon Soraru, Oklahoma City – The junior had 22 kills in a five-set wim over Hastings, and did it hitting .733 for the match; OCU went 3-1 on the weekend

Southwestern Bulldogs – SWOSU has only one win on the year (1-4), but it’s one of the program’s biggest, as the Lady Dawgs beat perennial power WTAMU for the first time in 13 tries, and in Canyon