O’Steen soars as a senior and sees the big picture 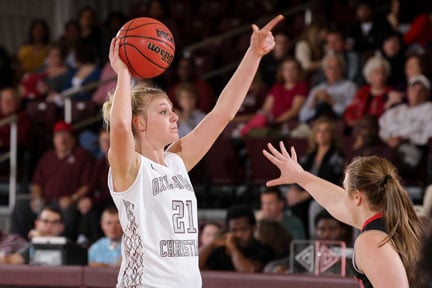 Oklahoma Christian is making the transition from NAIA to NCAA Division II.  And in a time of change, it’s always good to have some things that are stable.

The senior from Durant is the leading scorer on a team that is leading the Heartland Conference in scoring in its first season in the league.  Her accomplishments this year have also been recognized by her new conference.  O’Steen has earned Heartland Conference Player of the Week honors twice this year.

O’Steen acknowledged that her senior season has been a good one so far, but is quick to defer attention to her teammates.

“This year has been going great,” O’Steen said.  “But I couldn’t have asked for a better group of girls to be playing with my last year of competitive basketball.  I have been so blessed the past four years to have had a great coach and a great team.

“Honestly, my individual accomplishments could not have come without these girls and I’m just so thankful for how hard they’ve worked and how hard we’ve worked together for each other.”

O’Steen continues to amass those individual accomplishments. She became the 26th player in OC history to cross the 1,000-point plateau in November.  O’Steen now has 1,156 points and is 22nd on the all-time list for the Lady Eagles.  Her 16.5 ppg average puts her on a pace that could see her finish her career in the school’s top 15.

Add in 6.2 rebounds per game, which also leads the team, and the Lady Eagles’ post player is having a stellar senior year.

Oklahoma Christian (8-7) is one win from matching its win total from last year and is playing good ball against a new level of opponents.  And O’Steen said that this season has been challenging.

“The competition has been tough,” O’Steen said.  “We weren’t used to seeing some of the athletes that we’ve had to play, but it’s been good for us.

“The teams we’ve played in NCAA Division II have been very good and it helps us realize the hard work we have to continue to put in to stay up with that level of competition.”

The Lady Eagles are seeing a mix of new faces and old familiar foes.

And the Lady Eagles biggest rival according to O’Steen?

“Definitely SNU,” O’ Steen said. “Those girls and us – we’ve always wanted to beat each other.  It’s just been quite a ride going against those girls.  Going against SNU was always my favorite game to play.”

Oklahoma Christian split with SNU this season with each team winning at home, but OC’s win came later in the schedule giving O’Steen a win in the final time she would face the Crimson Storm.

O’Steen is finishing a career in the place she knew she belonged.

Even in southeastern Oklahoma, she was acquainted with the program at Edmond at an early age and when she was younger went to church with former OC standout Jay Mauck.

Mauck is another player who played high school ball in Bryan County.  He was a two-time NAIA All-American, one-time leader in career scoring, and OC Hall of Fame inductee in 2009.

And he was a good example for Katy.

“My family and I went to church with his family,” O’Steen said.  “And I grew up going to Cage Camp.  And once I went to Cage Camp and met Coach Findley, I realized that’s exactly where I wanted to be and where I knew I needed to be.”

“Coach Findley has been so awesome in helping me develop into the athlete that I am now,” O’Steen said.

And she welcomes the encouragement from Findley in the leadership role she’s acquired this year.

“It’s sometimes something that’s unwritten,” O’Steen said.  “But sometimes coach tells me, ‘Katy, you need to go be the leader.  You need to get out there and get your girls motivated.’ So that’s exactly what I do.  I just get my head down and go out there and do it.”

As she has become something of a role model, O’Steen doesn’t have to go far to find the person she said she patterns her play after.

“I know it sounds kinda cheesy, but that person is Lisa Chenoweth, our assistant coach,” O’Steen said.

“I played with her my freshman year and I watched the way she played and handled situations and the way she led the team and helped to give us that drive to win and to compete.

And now that she’s been our assistant coach the last two years, it’s just been cool to see the person I’ve looked up to the most since I’ve been playing college basketball to actually be there with me and help me to develop.”

And she’s glad to be doing all that she is at Oklahoma Christian.

O’Steen is leading her team in scoring and rebounding and is in the top 10 in the Heartland Conference in both categories. Photo courtesy OC Sports Information Department.

“Ever since I was a sophomore in high school I decided that’s where I was going to go and I wasn’t going to let anything stop me.”

The direction of athletics at Oklahoma Christian has taken a turn since O’Steen’s arrival in 2009.  Because of the Division II three-year transition process, things aren’t quite on the path O’Steen had envisioned her final season going down.

“Yeah, I was kinda sad when I first heard that we were making a transition during my senior year,” O’Steen said.  “I would have liked to have played for an NAIA title.

“But looking at it now, I see that it might have been a blessing in disguise because we get to play for the National Christian College Athletic Association title.

“And it’s been good in helping the younger girls to understand that they are building towards something.  This year may not seem like that much, but it’s building us toward something.  And it’s been awesome getting to help these girls develop and do something that goes beyond just me.”

And her time in Edmond won’t end with this season.  O’Steen said she will be around to assist as a student coach next year and will graduate in 2014.

So she continues to make her mark at Oklahoma Christian on the court this season.  And O’Steen said that she wants to be remembered as someone who did what she loved the most and did everything she could to be able to do that.

The numbers she will leave behind will attest to her desire to play.  And maybe there will also be a long playoff run to accompany them.