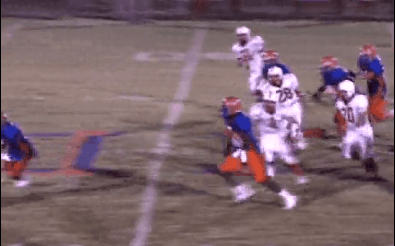 The Oklahoma Sooners are beginning to fill out their class for 2012.  They won’t be taking a big class this year, so they are making sure it is packed with quality athletes.
The Sooners are hot on the trail of two of the hottest prospects in the country, Dorial Green-Beckham and Gunner Kiel.  Green-Beckham is the top ranked wide receiver and Kiel is the top ranked quarterback by most recruiting services.  These two are taking trips all over the country but seem to have a few similarities in their list of top schools.  Alabama, Missouri and Oklahoma seem to be at the front of the pack in no particular order.
Although there is no real relationship between the two of them it’s interesting to look at the similarities in their recruitment.  Not since 2004 when Oklahoma landed Adrian Peterson and Rhett Bomar have the Sooners been in the running for two of the top offensive prospects in the country.
So now for the big question: What are the Sooners chances?  Nobody knows. As well publicized as recruiting is now, these two have managed to kept it close to the vest and to not really lead on as to who leads.  The next few weeks and months should be interesting as both are attempting to make a decision before their senior seasons start.