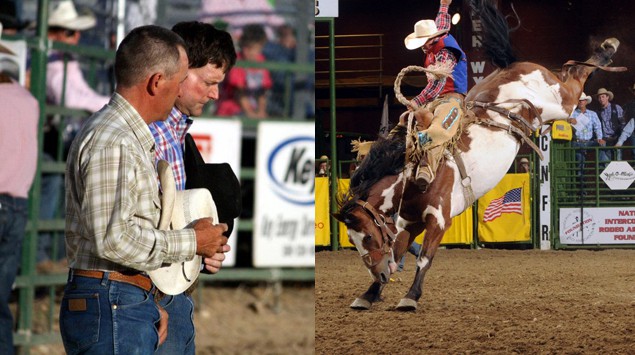 Left, Craig Latham and Robert Etbauer tip their hats during the opening of the Guymon Pioneer Days Rodeo.—Twisted Rodeo Photo; Right, Jake Watson rides his short round horse at the CNFR. Watson placed third in the nation.—Dan Hubbell Photo

Goodwell, Okla.—Goodwell, Oklahoma:  population of 1,322 residents and nothing more than a speck on the map. If one blinks while cruising down US Highway 54, they might miss the town altogether. However, like everyone in the rodeo world already knows, the small rural community is overflowing with talent.

Left, Craig Latham and Robert Etbauer tip their hats during the opening of the Guymon Pioneer Days Rodeo.—Twisted Rodeo Photo; Right, Jake Watson rides his short round horse at the CNFR. Watson placed third in the nation.—Dan Hubbell Photo

It is home to not only two-time World Champion Saddle Bronc Rider Robert Etbauer and multiple-time National Finals Rodeo qualifiers Craig Latham and Dan Etbauer, but also to numerous future champions. Taos Muncy, Cort Scheer and Trell Etbauer are just a short list of a younger generation of winners who have strong roots in the Oklahoma soil. And there are still more coming thanks to the tradition of winning at Oklahoma Panhandle State University.

The campus itself is much like the town; small in comparison to other universities. Still, within the walls of the classrooms and the fences of the arena there are college athletes being molded into champions. With a large team of roughly 60 students, OPSU is a top runner as one of the best collegiate rodeo programs.

A great amount of its success is credited to the legendary coaches at its helm. Latham and Robert Etbauer together have 21 trips to the NFR. Their “how to win” approach to coaching as helped lead Panhandle State to its fifth national men’s team title, with the latest being earned at this year’s College National Finals Rodeo.

“You just try to get as many qualified in the short round as possible each year and then you build on that,” Latham said of the recent title. “I am proud of all the kids this year. They worked hard and it worked out. All we can do is compete with class. Some days it’s our day and some days it won’t be but we just have to have class no matter what.”

The admiration is a two-lane street as the athletes competing under Latham and Robert Etbauer are just as proud to have two world-class bronc riders as their coaches.

“They [Latham and Robert Etbauer] have been exceptional to me. When I first came to Panhandle State, my bronc riding had gone backwards and they got me back on track and actually better than I was which is to be expected. They are two of the best bronc riders in the world,” Joe Harper, 2013 Reserve National College Champion Saddle Bronc Rider said.

Latham has been at the head of the rodeo program for ten years. In that time, he has not only cultivated numerous national individual and team champions, but also graduated top numbers. He stresses the importance of graduating within the four-year time span and encourages students to continue their education with graduate studies, if they so desire.

“I feel like we have the best combination of coaches around. Not only do Craig and Robert push us to do our best inside the arena, they push us to become even better people. They are both very good role models for us as student athletes,” Shelbie Weeder, Central Plains Student Director said. “When it comes to school, nobody takes our academics more serious than Craig.”

Robert Etbauer is a more recent addition to the coaching staff. The Goodwell resident has been a long-time supporter of Panhandle Rodeo through the weekly jackpots and the use of his indoor arena when unfavorable weather strikes the panhandle area. Two years ago, the university took the step and named Robert Etbauer the assistant coach and since then, the legacy has continued to grow.

“He [Robert Etbauer] has just built us up and challenged us to work harder; some liked it and some didn’t but his help with the livestock and letting the kids ride his horses has been a valuable part of this community rodeo team,” Latham said.

A community team is exactly what it is. If it was not for the support of local business and individuals such as Dan Etbauer, Bill Newman and Allen McCloy who donate their time, services and livestock, Panhandle Rodeo would not have the winning tradition that it does. It is a legacy that has cowboys and cowgirls traveling thousands of miles to the middle of No Man’s Land to wear the coveted red and blue vests.