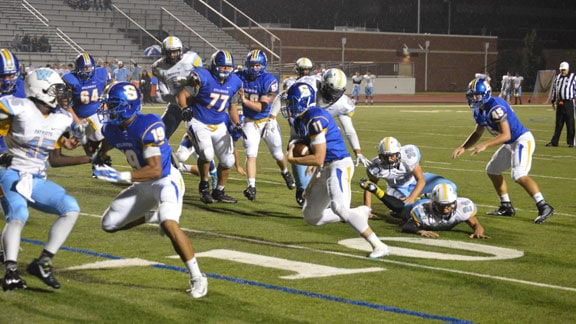 A blown play blew up Stillwater’s chances for a victory.

Stillwater was stuffed on fourth-and-goal from the 1 in the second quarter, and Putnam City West took advantage for a 35-26 6A-II District 2 win Thursday night to ruin Senior Night at Pioneer Stadium.

Quarterback Jace Brownlee was stopped with 4:45 left in the first half, and three plays later Putnam City West scored on a 95-yard pass.

The momentum shifted, for it went from a back-and-forth offensive battle to Putnam City West beginning to dominate.

“We come out of time out, it was a miscommunication and we got a couple guys run the wrong play,” Stillwater coach Tucker Barnard said. “Just a completely busted play.”

Brownlee said the missed opportunity was a major mistake. He ran left when the play was called to the right.

“There was only one play where I busted and didn’t score a touchdown where I should’ve scored a touchdown when I didn’t, that’s gonna haunt me for a while,” Brownlee said.

The Patriots responded on the ensuing drive to take a 21-14 lead with 3:42 to go in the first half on a 95-yard pass to Chris Potts. This was the turning point that doomed the Pioneers (3-5 overall, 2-2 district).

To start the second half, Putnam City West went for it on fourth-and-5 at Stillwater’s 7, and quarterback Trey Gooch picked up 6 yards.

Jordan Early ran in the ball from the 1 to increase the Patriots’ lead to 28-14 early in the third quarter.

“We still had opportunities to be in the game, to win the football game but weren’t able to do it, so we gotta play better, we gotta coach better,” Barnard said.

The Pioneers struggled to stop Putnam City West (4-4, 2-2) early in the first half. After two Stillwater offsides and Gooch’s 16-yard run, the Patriots took a 7-0 led.

Brownlee threw for 96 yards and ran for three touchdowns and 141 yards. Jordan Brown ran for 110 yards in his final game at Pioneer Stadium.

“I feel like I played as hard as I could for them (the seniors),” Brownlee said.

Brown also realized how hard Brownlee wanted to win and how hard he played.

“Jace wants to go out and score and win games,” Brown said. “I think I played good tonight; I mean it’s my last home game here so I went all out.”

Stillwater attempted a comeback when Josiah Castleberry ran up the middle for a 50-yard touchdown run to cut the lead to 28-20.

“We got outcoached, we got outplayed; they were more physical than we were,” Barnard said.

Because of the loss, Stillwater will have a harder time making it to the playoffs.

“If we win out, I think we’re still gonna get in, but we gave ourselves a difficult time in the chances of hosting,” Barnard said.