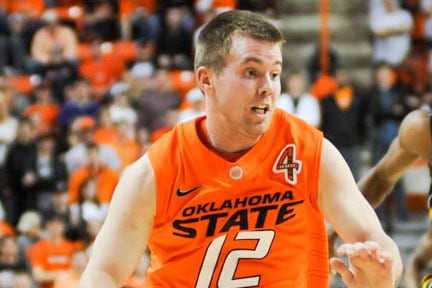 STILLWATER – It didn’t matter if there were two, three or four defenders around Keiton Page. The Pawnee Pistol couldn’t miss a shot.

Page, from Pawnee, Okla., scored a career-high of 40 points to give the Oklahoma State Cowboys a 90-78 victory over visiting the Texas Longhorns. Oklahoma State snapped a four-game wining streak held by the Longhorns.

Page ended up becoming only the sixth player in school history to reach the 40-point mark. Page also hit all 20 of his free throws, which broke a Big 12 record for most attempts and makes.

Before the game, the first 400 students received a free “LobStilly” (a popular trend on Twitter to

describe highlight dunks) t-shirt.  The Cowboys didn’t disappoint their fans as there was a “LobStilly” sighting in the first period when OSU point guard Cezar Guerrero lobbed a pass to Le’Bryan Nash for the monster jam. Nash finished the game with 18 points and four rebounds.

The Longhorns had to deal with foul trouble throughout the game. Two Texas big men, Alexis Wangmene and Clint Chapman picked up two early fouls to help the Cowboys go on a 15 to five run early in the first period. The Cowboys went into halftime with a 51-39 lead thanks to a three-point buzzer beater by Page.

The Longhorns J’Covan Brown cut the Cowboys lead down to 61-58 at the 10:14 mark after hitting back-to-back jumpers. Brown finished the game with 20 points.

Page caught fire again and the Cowboys went on a 14-3 run to gain control of the game in the final minutes. Head coach Travis Ford pulled Page from the game with 35 seconds left to allow him to leave to a standing ovation from the crowd.

The Longhorns overall record dropped to 17-10 and 7-7 in conference play. Texas returns to action on Feb. 20 against the Baylor Bears.

The Cowboys improved its record to 13-14 and 6-8 in conference play. Oklahoma State returns to action on Feb. 22 in a Bedlam matchup against OU.