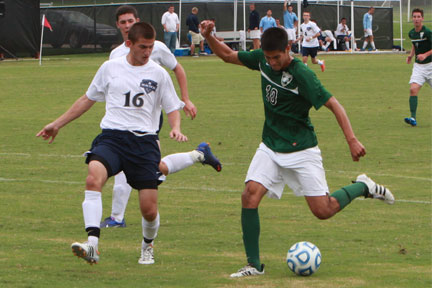 KANSAS CITY, Mo. – Juan Peralta has been named the MIAA Men’s Soccer Athlete of the Week, the league announced today.

The sophomore forward scored four goals and added an assist to help Northeastern State to two shutouts victories last weekend. The RiverHawks defeated Truman 4-0 and Upper Iowa 3-0 to move to 4-1 in conference play.

Peralta scored twice in both contests, which included the game-winning strike against UIU. He finished with five total points in the game against the Bulldogs as he had two goals and one assist.

There have been five MIAA Men’s Soccer Athlete of the Week honors handed out this season, and three have gone to RiverHawks. Senior goalkeeper Jordan Ladbrooke earned the first award of the season (Sept. 4), and senior midfielder Bo White won the laurel the following week (Sept. 11).