Perkins-Tryon not perfect yet, but pretty good 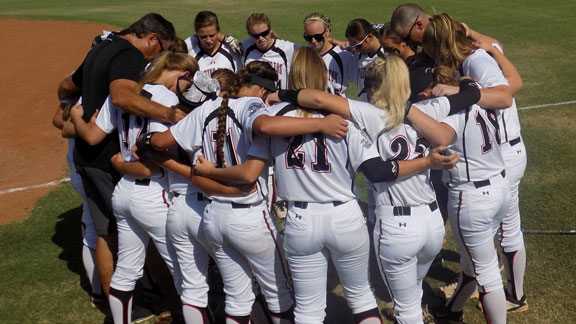 It’s been a pretty intense start to the season for the Perkins-Tryon softball team.

The Demons played 15 games in the first two weeks and midway through Week Three are sitting at a solid 14-3 on the year.

In his first year at P-T, head coach David Griffin said he is pleased with his team and that those setbacks didn’t come to lightweights.

“Our losses are to two undefeated teams,” Griffin said.

Two of the losses were at neutral sites and one on the road.

“We’ve got a pretty good team,” Griffin said. “After we get everything straightened out with our lineup and have a good idea of what our roles are, we’ll be even better. We have some girls that didn’t play in that position last year, so we’re having to learn a few things. We’re not perfect yet and we knew we weren’t. But we’re pretty good and I’m really proud of them.

“We have good pitching, good defense, good hitting. You know, you’ll have those days where you’re not going to have great hitting and have to go with a little short game and we’re getting better at that.”

And he joked about one more ingredient that might help.

“All we need is just a little more luck.

“We lost 5-4 in the finals to Chickasha and we had a runner on second with one out and hit a line drive up the middle to the pitcher and then got caught off base, but I tell you what, it wasn’t an average player that got us out. Their shortstop, who is going to OSU, made a heck of a catch to get us out. That was a rare and heads up play by the pitcher and the shortstop.”

Griffin has 30 years of coaching experience under his belt along with two state championships and a state runner-up finish. His 1987 Pryor team won the Class 4A title the school was the runner-up in 1992.

He also led McLoud to the fast pitch championship in 4A in 2002, the school’s only state championship.

Griffin comes to Perkins following a year coaching with his son in Maysville and seven years in Davis prior to that.

He had compliments to go around for his entire P-T team nearing the mid-point in the season.

Although it hasn’t been an easy road for the Lady Demons. There has been little time to rest since the season opened. But Griffin said he is not the person to take credit for that.

“I didn’t make the schedule. When I took the job, the athletic director handed it to me and said, ‘Congratulations. Here’s your schedule.’ I looked at it and said, ‘Whoo!’

“In 30 years of coaching, I’ve won two state championships and a state runner-up and I’ve been to state a bunch, in both fast and slow pitch. And this may be the toughest schedule I’ve had to start a season. We’ve played 15 games in two weeks and there haven’t been many duds.”

The Lady Demons are 1-1 this week already with an 8-0 shutout of Berryhill on Monday and a tough one-run 8-7 loss at Cleveland on Tuesday.

P-T is at Luther on Thursday afternoon and at home for Class 6A Bixby on Friday.

And as busy as it has been for Griffin’s team, he said he is not making things difficult on them.

“There’s the Keep It Simple, Stupid method – the KISS method – and that’s what we preach every day. There’s nothing fancy about this: do your job, remember your signals and those things.