Pioneers run personal bests, but come up short at regionals 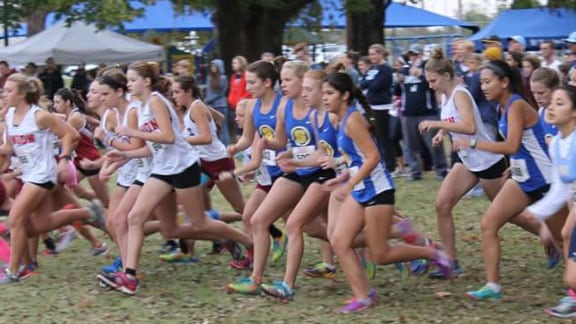 All seven varsity members of the Stillwater girls’ cross-country team ran personal bests at the Class 6A East Regional Championship at O’Brien Park in Tulsa on Saturday but failed to qualify for the state meet.

The Pioneers placed 10th of 14 teams with 256 points. Bartlesville won the team championship with 36 points, and Sand Spring’s Cheyenne Walden won the individual championship in 17 minutes, 35 seconds in the 5K.

Although the girls couldn’t end Stillwater’s 13-year absence from the state meet, coach David Crynes said he is proud of the way they performed.

“Every girl [ran a personal best], and that’s what we wanted to do,” Crynes said. “Class 6A is always really competitive, so you do your best and hope that’s enough.”

The odds were stacked against the Pioneers, for six of the top 10 teams in Class 6A competed in the region. However, the girls didn’t back down from the challenge.

The team improved by 8:04, with four of the seven girls knocking more than a minute off their previous personal bests.

“I’m so proud of all the girls,” junior Elise Rackley said. “We all came together, and we all ran as fast as we could. Everybody cut a lot of time, minutes even. I’m sad they didn’t make it, but I’m still really proud of them.”

One of the biggest improvements belonged to Rackley, who placed 29th in 20:40, 1:38 faster than her previous personal.

“I actually didn’t know my time until after the race when someone told me,” Rackley said. “I never look at the time when I’m running, but I could feel I was going really fast.”

Rackley qualified for the state meet as an individual.

A right hip injury has hindered Rackley all season, but she said she felt similar to how she did before she suffered the injury, making racing “fun again.”

“It felt really good because this has been probably the hardest year for me injury-wise,” Rackley said. “I’m excited I’m finally back into state.”

Although she is excited, Rackley said she feels sad and disappointed because she wanted the other girls to qualify for the state meet with her, especially seniors Ella Luttbeg and Rachel Brown.

Luttbeg broke her personal best by 51 seconds, and Brown broke hers by 43 seconds.

“We felt good when we were running, and we were definitely focused,” Luttbeg said. “We knew what we needed to do, and we knew that it was time to go and we went.”

Brown said she could feel a difference in the way she ran.

“While I was running, I was like, ‘This is pretty fast; we haven’t run this fast yet,’” Brown said. “We felt good holding it, so I had a feeling the whole time we would run [personal bests], which is really awesome.”

Although the girls didn’t accomplish their goal, Luttbeg said she is happy with her performance.

“I ran the best race of my life and so did all of the other girls,” Luttbeg said. “I’m really proud of us.”