Pioneers shut out at home by Wolverines 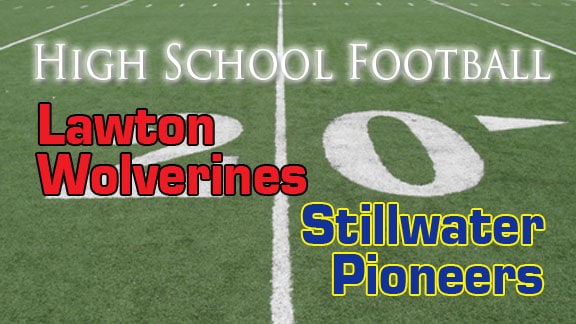 A couple of long plays made for a long night for the Stillwater football team Friday night.

The Pioneers’ defense improved from quarter to quarter but couldn’t stop Macheenan Hair on a couple of deep routes in a 24-0 District 2 loss at Pioneer Stadium.

Hair gave the Wolverines a 7-0 lead less than a minute into the game with a 58-yard touchdown reception.

He scored on a 75-yard catch to give Lawton a 17-0 lead midway through the third quarter. Hair finished with five receptions for 143 yards.

“It was great preparation overall from the coaches,” Lawton quarterback Zack Hanna said. “We have great receivers who are fast, the fastest in the state, and I just trusted (Hair) and I knew he’d get behind them. Finally I read the defense well and I just let it fly.”

Hair said preparation allowed the Wolverines to play with their usual confidence.

“We thought we had this game from the beginning,” he said.

Hair said his speed played a key factor in both touchdown passes, but said he had to give credit to Hanna.

“Zach was amazing tonight,” Hair said. “That’s my quarterback, and I love him to death.”

Along with the passing struggles, the Pioneers (2-4 overall, 1-1 in District 2) couldn’t stop running back Tre Curry for a majority the game.

“He’s strong,” Hanna said. “He’s one of the fastest guys I’ve seen run the football, and he does a great job.”

Although the Pioneers were outgained 189-9 in the first quarter, the defense held Lawton to a field goal and touchdown before allowing 35 yards in the second quarter.

“We adjusted a little bit to their speed,” Stillwater Coach Tucker Barnard said. “We can’t simulate the way those guys run. Just like Christian (Bahl) getting his hips wrong on the (58-yard) deep ball. We’ve worked that route and we even knew the combination we think that was coming at us but we can’t simulate the speed.”

Stillwater was unable to move the ball on the faster Lawton defense and punted nine times.

Unlike their previous game in which they had success getting the ball to wide receiver Jordan Brown, he was able to touch the ball twice for 23 yards against Lawton (6-1, 2-0).

“They were doing a good job,” Barnard said. “They were paying attention to him.”

Brown said the lack of touches wasn’t because of Stillwater’s offensive plan but rather Lawton’s defense.

“Tonight was rough,” Brown said. “Having two or three guys on me, it’s really tough trying to get the ball. Our offense realized that and we tried to adjust to that and we couldn’t work it out.”

Brown said though the loss was tough after Stillwater entered the game tied for the district lead with the Wolverines, they can’t afford to lose confidence.

“Tonight we can be all sad about it but tomorrow we’ve got to focus on Choctaw and be ready for Choctaw on Thursday,” Brown said.