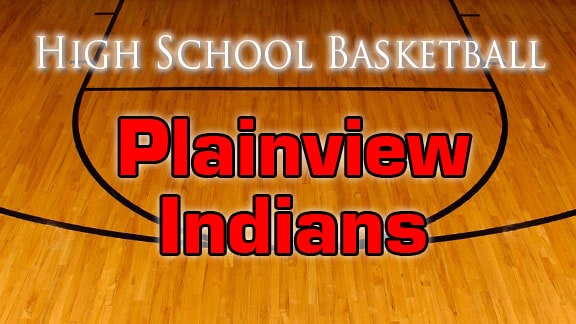 Plainview coach Andy Bloodorth has had a young team for a while, but that team has grown up over the years, both in age and in what it feels it has the potential to be.

“We came into the season still a fairly young team, and we were playing a lot of freshmen and sophomores for the last couple years,” Bloodworth said.  “It’s been a learning experience and we came in with pretty high expectations.

“And we wanted to go out to the Bertha Frank Teague Mid-America Classic and have a pretty good showing and mainly just gain some experience.  I feel like we did a pretty good job of that.”

Plainview (13-2) has put together a five-game winning streak since the Mid-America Classic in Ada and has moved into the No. 6 spot in the OSSAA Class 4A rankings.

The Indians had won eight straight to open the season, but came up against some tough opponents as December was winding down.  Plainview beat 5A Shawnee by a point, but then lost to Class 2A Alva, 54-49, and Class 3A Washington, 42-39, in the tournament.

“We lost to two No. 1 teams up there pretty much in the last minute of each of those games,” Blooworth said.  “But I think we learned a few things there that we can utilize in the playoffs.

“I think the girls, to be honest, were wondering if they were contenders when we went into the Mid-America and I think after we left there that the light bulb came on that they realized that they belong. That’s just something that we’ve used as a springboard.

They’re playing with a lot of confidence and sharing the ball and really selling out of defense. As a coach those are things you definitely look for in a quality team and at times, they make my job look easy.”

A simple glance at Plainview box scores reveals three names over and again: senior Hayden Hunt and juniors Megan Shelton and Rebecca Wright.  Bloodworth was ready to sing the praises of each.

“Hayden has started for us for four years and she’s gotten better every year,” Bloodworth said.  “Last year, we really challenged her to step up on the defensive side of things and that’s had a huge impact for our team. Not only defense, though, she’s a threat to score. You can’t leave her alone or she’s going to knock down a three.

“Her senior leadership really goes a long ways. She’s just as good in the locker room as she is on the floor. She’s a good motivator and lightens the mood a lot of times.”

“We have the ball in Shelton’s hands to bring it up the floor probably 90 percent of the time and she does a great job sharing the ball and making her teammates better.

“She’s really taken her offensive game to the next level. She’s really been working on her outside shooting, as well as getting the ball and finishing at the rim. That’s one thing I’m really impressed with is that she’s taking the ball to the hole and getting to the free throw line.”

And then there’s the versatility Bloodworth said he gets on the inside from Wright, which he said is what makes her so good.

“Rebecca is probably one of the best posts in the state. She can bring the ball up the floor. She can handle pressure. Defensively, she can block a lot of shots. Offensively, she’s a mismatch, no matter who is guarding her.

“If they put somebody quick on her, we’ll post her up. And if they put a big on her, she’ll step out and shoot the three. She sees the floor so well and she passes the ball on the triple teams. She’s just a blessing to have on the team.”

Plainview next takes to the court against a cross-county rival on Friday night.  And the season stays at high intensity from there.

“Friday night is going to be tough because we go to Dickson (4-8) and that gym is always rocking. They’ve got the little pep band with the electric guitars and the loud and rowdy student section and it just seems to resonate off the metal walls in there. So we’re not overlooking them.

“And then we’ve got three ranked opponents (Bethel, Comanche and Davis) midway through the second half of the season. And those are all going to be tough games. We’re definitely going to have to stay focused and take one game at a time.

“We’re looking forward to the challenge. We want to, first of all, win our conference, and once the playoffs come around, really bear down and try to be the first team in the history of Plainview girls basketball to win a state tournament.”

Plainview is at Dickson with the boys’ teams for a doubleheader in the Lake Country Conference that gets underway at 6:30 p.m.