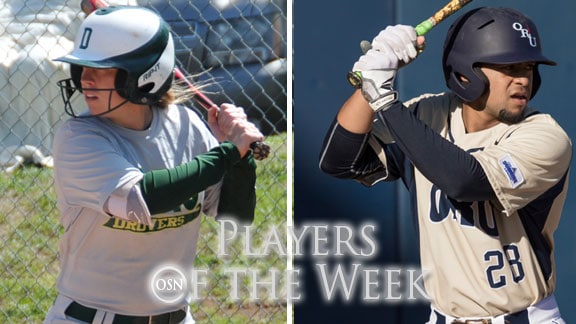 This week’s Players of the Week are Tate Landmark, USAO, and Derrian James, ORU.

Landmark helped the Drovers to a 6-0 week (and continued a 14-game winning streak), pitching her team to two wins and she picked up a save as well. The sophomore also hit .388 over six games with five RBI and six runs.

James batted .429 on a week in which his team went 3-1 and a series win over South Dakota State, as well as a victory over in-state rival Oklahoma State. James had five RBI, seven runs scored, two home runs and did not strike out. His biggest game was in the series finale against the Jackrabbits, as he went 3-for-5 with a home run, four RBI and two runs scored in the 9-2 victory.