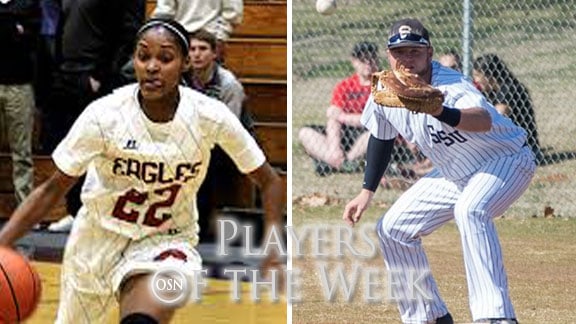 This week’s Players of the Week are Nichole Tate, OKWU, and Chance Burcham, SOSU.

Tate averaged a double-double in her games in the NAIA Division II National Tournament. She had a game-high 21 points and nine rebounds in her team’s three-point win over Eastern Oregon. OKWU lost to the No. 1 team in the country, Morningside, in the next round, but Tate had 14 points and 14 boards in her final contest.

The Savage Storm went 2-2 on the week, but earned a series victory over Harding and Burcham’s bat had a lot to do with that, as he hit .714. He went 4-for-4 in the opener, had four RBI and crossed the plate four times. He also left the yard to open the scoring in a 4-3 win over the Bison in the series finale.