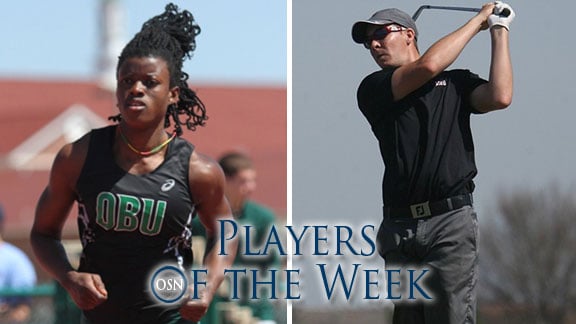 This week’s Oklahoma college Players of the Week are Elizabeth Dadzie, OBU, and Michael Hearne, SNU.

Dadzie was the Most Valuable Performer at the NAIA Outdoor Track and Field Championship. She had two national championships – the 100 meter hurdles (13.42) and the long jump (20-3) – while earning All-America honors in two other events – fourth in the triple jump (38-11) and sixth in the 4×100 relay (47.51)

Hearne became the first student-athlete at SNU to reach an NCAA national championship and finished fourth in the men’s golf championship. He carded a 71-69-70 – 210 and finished in the top five as he did in every tournament this year. Hearne was also named a First Team All-American this week.